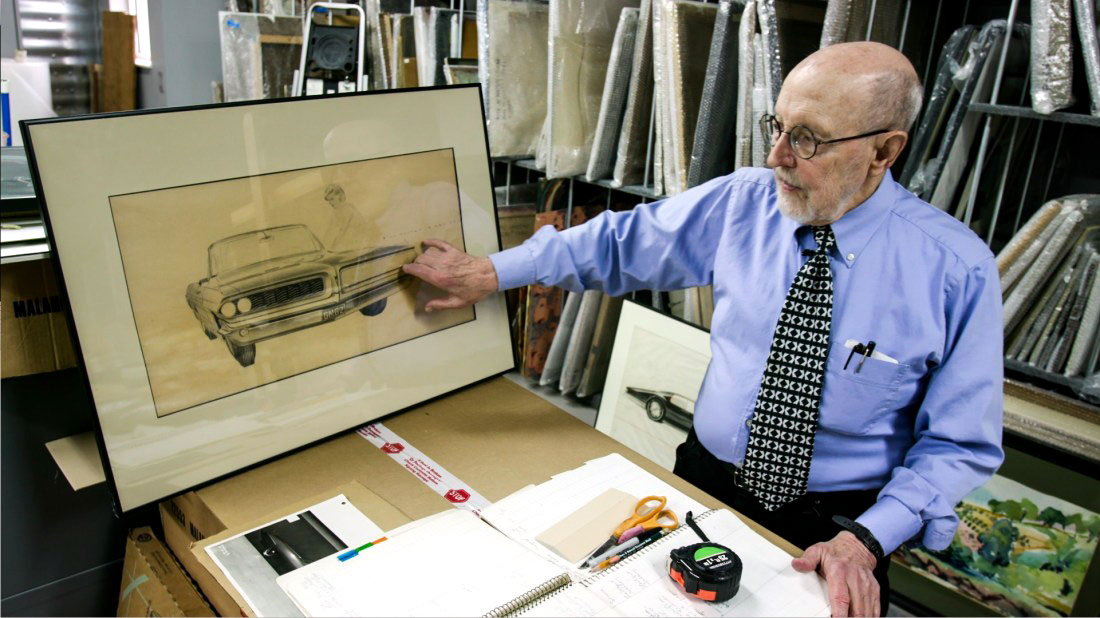 Bill Porter is a legendary automotive designer, best known as the designer behind the iconic 1968 Pontiac GTO. He has gotten many designs in production credited by his leadership and design contributions that have followed much of his career at General Motors spanning 40 years! As Chief Designer in both the Pontiac and Buick studios, Bill has led the production design for cars such as the Pontiac GTO, Firebird, Catalina, Bonneville, Le Mans, and Grand Am as well as Buick Electra, Le Sabre, Regal, Park Avenue, and Riviera. Watch as Bill tells us about specific facts that went into the making of the all new 1970-½ Pontiac Firebird Trans Am, while he shows us his personal 1973 Firebird.

Dean’s Garage, The Future is Back is available!

Designing a new car, as we have seen, is tough work. Bill Porter is the man responsible for leading the team responsible for coming up with the exterior design of the 1970-½ Pontiac Firebird. Bill saw the car as a blank canvas where anything was possible, but designing a car that shares parts with other GM vehicles designers have to work closely with other design departments to make sure everything fits. Hear how Bill had to fight for his design ideas to make the Firebird look like his original drawings.

The Invention of the Endura Front End by Pontiac

The plastic-like material donned on the nose of famous Pontiac cars such as the Firebird and the GTO is called Endura. It can be credited to a man named Warren Fitzgerald whose contributions to the material helped designers like Bill Porter push the aggressive shapes and styles that could now be made from the material for the front of Pontiac cars. The material was originally created for the Pontiac GTO, but Bill pushed and fought for the material to also be used on his design for the 70-½ Pontiac Firebird. Watch as he tells with amazing insight into how the Endura material made its way onto the Firebird.

I’ve Got an Old GTO. Want to Have it?

When a stranger from Louisville, KY. heard on the radio that Bill Porter (the man responsible for the designed the 1968 Pontiac GTO), always wanted a GTO but didn’t have one. He offered up Bill his own personal ‘68 GTO. Watch in as Bill tells an amazing story from the classic car community.

Sneaking Sketches Taped in Your Jacket

As we have already heard through different interviews in this series, many artists didn’t have the heart to let their work go to the waste bin. Bill was no different. Watch as he tells us some of the methods he had for sneaking his own art work out.

Dragster for the Wind Tunnel

Not all the work that automotive designers did was meant for the street. Sometimes designers would work on projects just for fun. But information they would learn from these projects would eventually find its way to the street for public use. As GM started using wind tunnels for aero studies, Bill experimented with different dragster designs in hopes of using the wind tunnel to test different theories. Although this project got stopped short of actually getting into the wind tunnel, its story is still interesting to learn.