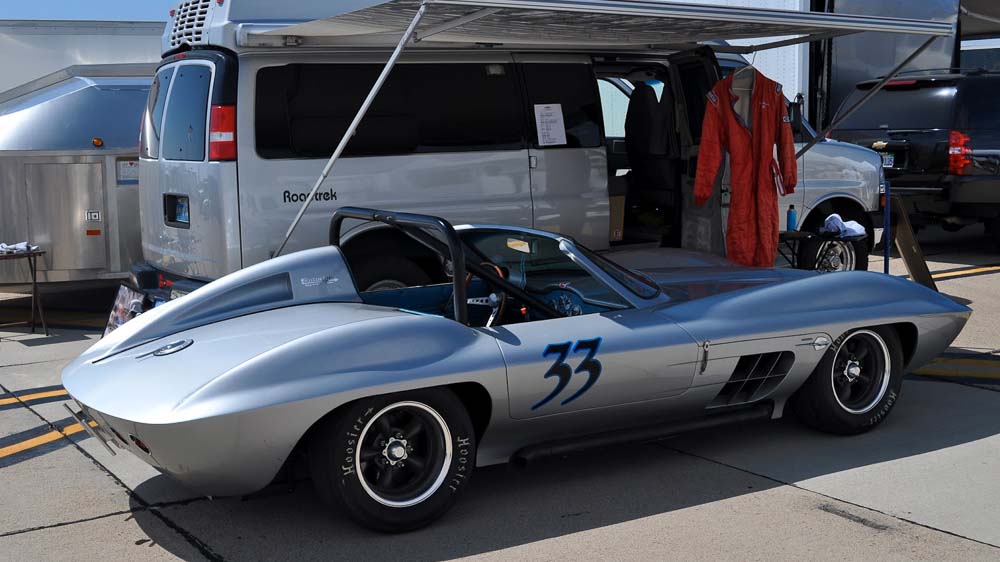 This isn’t Mitchell’s 1959 Stingray. The body of the Centurion was built by 1959 by Fiberfab Corp. in Sunnyvale, California as a factory concept vehicle used as a prototype to make future bodies to sell to the general public. The bodies were designed to fit a 1953 through 1965 Corvette chassis. This particular example is the only one built on a C-2 (1965 Corvette chassis).

The owner of Fiberfab, Bud Goodwin, had designed several different innovative sports car bodies in the 1960s such as the Banshee, Aztec G.T., Azteca, Avenger, and Valkyrie. He was impressive with the Stingray racer the he designed this body in that image. In total, only four other bodies were built and sold and two were completed, the other two are still bare shells. Fiberfab opted to go with the Valkyrie for reasons unknown but probably due to pressure from General Motors. Thus the Centurion project was abandoned. (If GM “influenced” Fiberfab that it was in their best interest not to continue with the Centurion, it would make a great story for Dean’s Garage.)

This Centurion was used in numerous promotions during the late 1960s including a “Man From Glad” commercial. It was club raced a few times in California by Bud Warren and is one of only three built “In the day.” It still retains the original 327-350 horsepower motor, chassis, transmission, and differential from the donor 1965 Corvette. It’s the same car that is on the cover of the 1966 Fiberfab Catalogue.

The transmission is a Muncie Heavy-Duty M-22 close ratio unit with a 3:70 ratio posi rear end. The engine is fitted with a Holly 750 4-barrel carburetor and the original intake. The brakes are factory Corvette H.D. J-56 and the wheels are also original, measuring 15×7.5.

Fiberfab Promotional Materials from the Collection of Ron Will

The Centurion was occasionally club raced by Bud Goodwin and was used in many promotions car dealerships, commercials, and used as a back up car in the Elvis movie, “Clambake.” It was purchased and in need of restoration in 2007 by vintage racer Wes Abendroth. He has restored the car to full-on race condition and competed in many races during 2009 and 2010.

Although it must race in the highly competitive B-production class, it still retains the original 327/350 engine and drivetrain from the 1965 donor Corvette. At the 2011 Monterey Historic Races, Jay Leno interviewed Wes. Supposedly the video is on Jay Leno’s garage, but I have yet to find it.