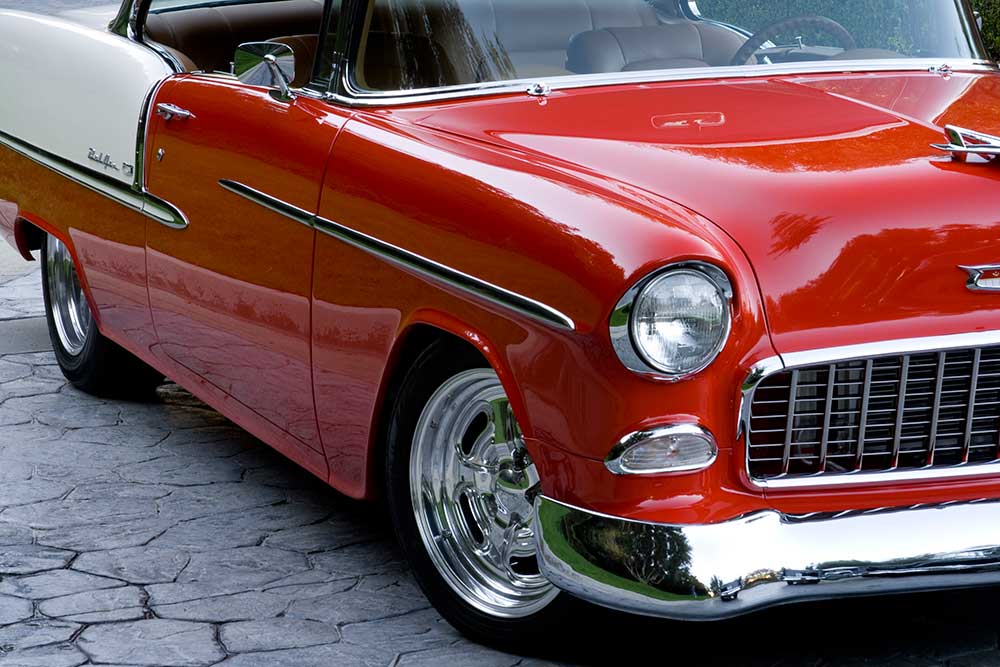 I gained a new appreciation for the life of a professional photographer. They were grueling and stressful trips. Very hard work. The trips took a great deal of planning and coordination. To be as efficient as possible, two shoots were scheduled each day. The longest duration of a single trip was about five days. The appointments were planned to get the first car shot in the morning, and then meet up with the second owner for the afternoon shoot. The locations had to be relatively close to each other, or I’d probably still be stuck in LA traffic. The morning panic started with a predawn search for the owner’s home or a shoot location. No GPS. I had prepared and printed maps and placed them in a three ring binder.

About 40 cars were shot altogether; each book features 18. Ron decided that there were more recent interiors that he wanted to include, so a couple of cars were dropped. A few car owners had other cars other than a Tri-Five Chevy or a Ford Roadster with Ron’s upholstery that I photographed while I was on location, hoping that they might be used in future books. Eight years later more books in the series doesn’t seem likely.

During lunch I would download the RAW photos from the camera onto my laptop, and also back them up to a portable drive as a backup. When I returned home, every RAW photo was processed and backed up to DVD. One of the first cars I shot, I accidentally trashed the big high-res images that I needed for the book, and had to go back and shoot it again.

Nearly all of the shooting occurred in the winter months. I was often uncomfortably cold standing outside for hours in the early morning California air on many shoots. A couple of the cars were in the mountains in northern Arizona. Even colder.

Several cars were shot in the late afternoon at the Rialto airport near Ron’s shop. The activity at the airport was minimal—therefore I could have a car driven onto the tarmac. With mountains to the north in the background, the sun setting to the west, and what seemed like acres of black underfoot, it was a fantastic place to shoot cars. The magic light in the early morning doesn’t last very long. But one owner lived just west of a fairly high mountain that extended the shooting time considerably. The soft light was wonderful, made even better by reducing the mad panic before the magic light went away.

I had to rely on the owners’ judgment for suitable locations for the exterior shots because I wasn’t familiar with any of the areas. Most owners knew just where to take their cars. I’d shoot the exteriors at first light, and then we’d move the car to a suitable location out of direct sunlight to shoot the interior. For an afternoon shoot, I’d photograph the interiors first, and then the exterior in the late afternoon. Shooting two cars in one day was exhausting. Sometimes the owners would have two cars to shoot. Even more fun.

There were a number of challenges in shooting the interiors. If I couldn’t control what would be seen through the windows, I had prepared a large translucent white shear fabric and would drape it over the top of the car held in place with cloth covered magnets. The effect was like the interior was in a lightbox. Sometimes wind would remove it for me. Reducing background clutter using this technique saved considerable time in Photoshop retouching.

Chevy Nomad interiors were particularly challenging. The rear quarter windows slide open, but not very far. My tripod has a removable vertical support that holds the camera that could be inserted sideways through the top of the tripod. That configuration enabled the camera to be cantilevered inside the interior through the small quarter window. Of course, the car I had to re-shoot was a Nomad. The car owners were great.

Jim St. Martin treated me to a nice breakfast at an ocean side restaurant after an early morning shoot at the beach of his ’32. Chick Koszis took me for an ride in his blown ’32 Ford roadster (Bare Bones, which was stolen a few years later) around the scenic rolling hills and twisty roads near where he lived north and east of San Diego that lasted over an hour. That was a blast. Don Redding, owner of the copper ’55 Chevy, had an employee bring a 12-foot ladder to the shoot. Cool.

On one trip I got lost near National City (south of San Diego). I was on a freeway in moderate traffic paying attention to my driving and almost missed a sign which read, “Last U-Turn Before Entering Mexico.” Wait, what? It was a good thing I saw the sign and had the presence of mind to take that final exit. Entering Mexico would have been a major problem. I might still be there.

In addition to the photography, I co-authored both books, designed the covers and interiors, and prepared the books for publication in Adobe InDesign.