The Origins of Ford’s Retractable Hardtop 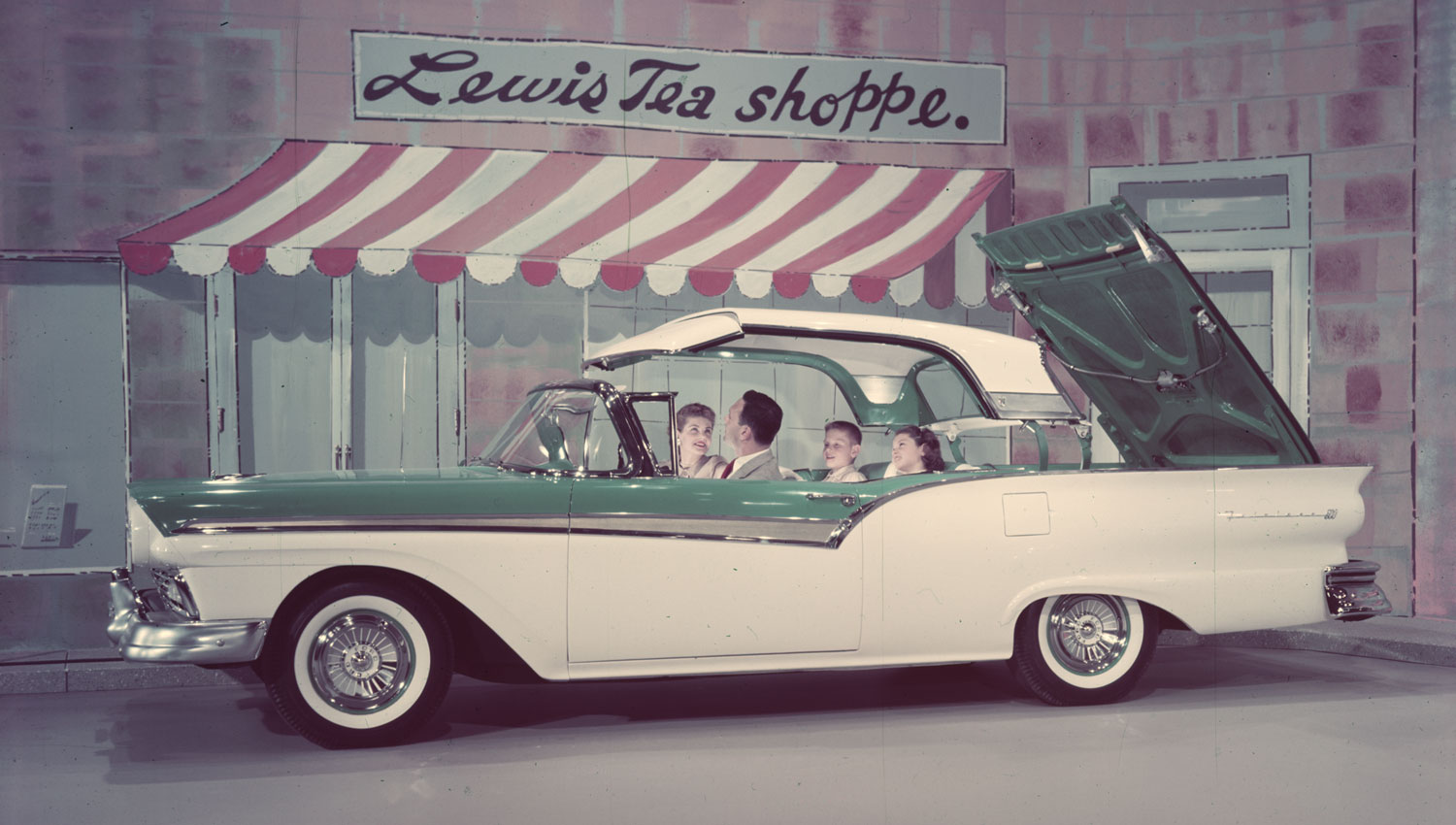 The Origins of Ford’s Retractable Hardtop

Gil Spear was not only a good artist, he had the ability to understand and resolve complex engineering issues. He was easy going but also had a mischievous sense of humor. On the way to work one morning in late 1948 he pulled up along side someone driving a new ’49 Buick Riviera, one of GM’s first hardtop-convertibles. Spear thought calling the car a hardtop-convertible was false advertising, so he insisted the driver put the top down. The other driver got a perplexed expression on his face, the light turned green, and Spear drove away chuckling to himself.

By the time he arrived at work that morning, Spear thought he could design a car with a roof that actually retracted. His first design was a car with a top that slid back over the deck lid, with the backlight parked over the rear license plate. Over the next few months, Spear came up with several different methods for collapsing the roof over the top of the deck lid, and he actually built a 1/8-sized model of it. To try to interest management in his Roof-O-Matic idea, Spear made a top that could actually be retracted over the deck lid of the 1/8 model by means of a wind-up paper clip—and he made up a booklet with all the methods he could think of for making a real retracting roof. Soon, the Ford brothers and the head of Ford Division, Lewis Crusoe, were winding and unwinding the paper clip and then studying his booklet. In the meantime, assistant design manager Gene Bordinat convinced Spear he had a better chance of selling his Roof-O-Matic concept to management if the top could be folded down inside the trunk and not on top of it. The next thing Spear new, Earle MacPherson stopped by, read the booklet, became enthused, assigned a production number to the project—and on the spot authorized Spear to build a 3/8-sized clay model with a working Roof-O-Matic.

Because Spear thought Ford Division was most likely to actually produce a Roof-O-Matic, he drew up plans for a Ford Roof-O-Matic, but the 3/8 sized clay model he designed as a flashy concept car that would appeal to all divisions. When the 3/8-model was begun, Spear named it the Syrtis. Although the name “Syrtis” refers an area of the moon or a place in the Sahara Desert, Spear picked the name as the most unusual one he could think of so people would ask about it. It worked.

Spear was assisted with the design of the Syrtis by designers Jim Huggins, George Krispinsky, and Ben Kroll. The clay modelers were Larry Wilson and Michell Rukat, and the studio engineer was George Martin. Howard Fifield from the metal shop made the metal top for the 3/8-sized model. The shops also rigged up a small electric motor that ran the top into the trunk and back up again. The 3/8-sized model was finished in June 1952. At first there were no plans to make the Syrtis public—until a photographer included a photo of the 1/8-sized model—paper clip and all—in a book for Ford’s 50th anniversary. The cat was out of the bag and a press release soon followed.

Jim Huggins was soon recruited by Chrysler, and a retractible concept car he designed there was supposedly built at Ghia. It was said to be with the Norseman when the Andrea Doria sank while bringing the cars back from Italy. Bill Ford wanted the retractible concept for the Continental Mark II program he was just starting. Benson Ford also wanted it for the XM-800 Mercury concept car, which was supposed to be the prototype for a new Mercury model named the Monterey. Ford’s board of directors backed Bill, and that led to a Continental Mark II retractible prototype called the Mechanical Prototype (MP) # 5. After MP#5 was successfully completed, it was decided a production Mark II retractible was not in the cards. But a retractible model called the Ford Skyliner was produced from 1957-59.

In 1953, when it was decided to build a Mark II retractible, the Syrtis 3/8-sized model was moved to the location where the Mark II retractible being built. Sometime in 1956–57, Spear got a call from Fifield, who was in tears. Fifield told Spear the Syrtis was being busted up out on the loading dock. Spear got there just in time to see a pile of rubble that used to be the Syrtis, but he never found out who ordered it destroyed.

The XM-800 concept car was built, but it wasn’t a retractible, and it never became a new Mercury model. Instead, it was replaced by the Edsel—and we all know how that turned out.