The Lincoln Futura, Part 2: The Batmobile 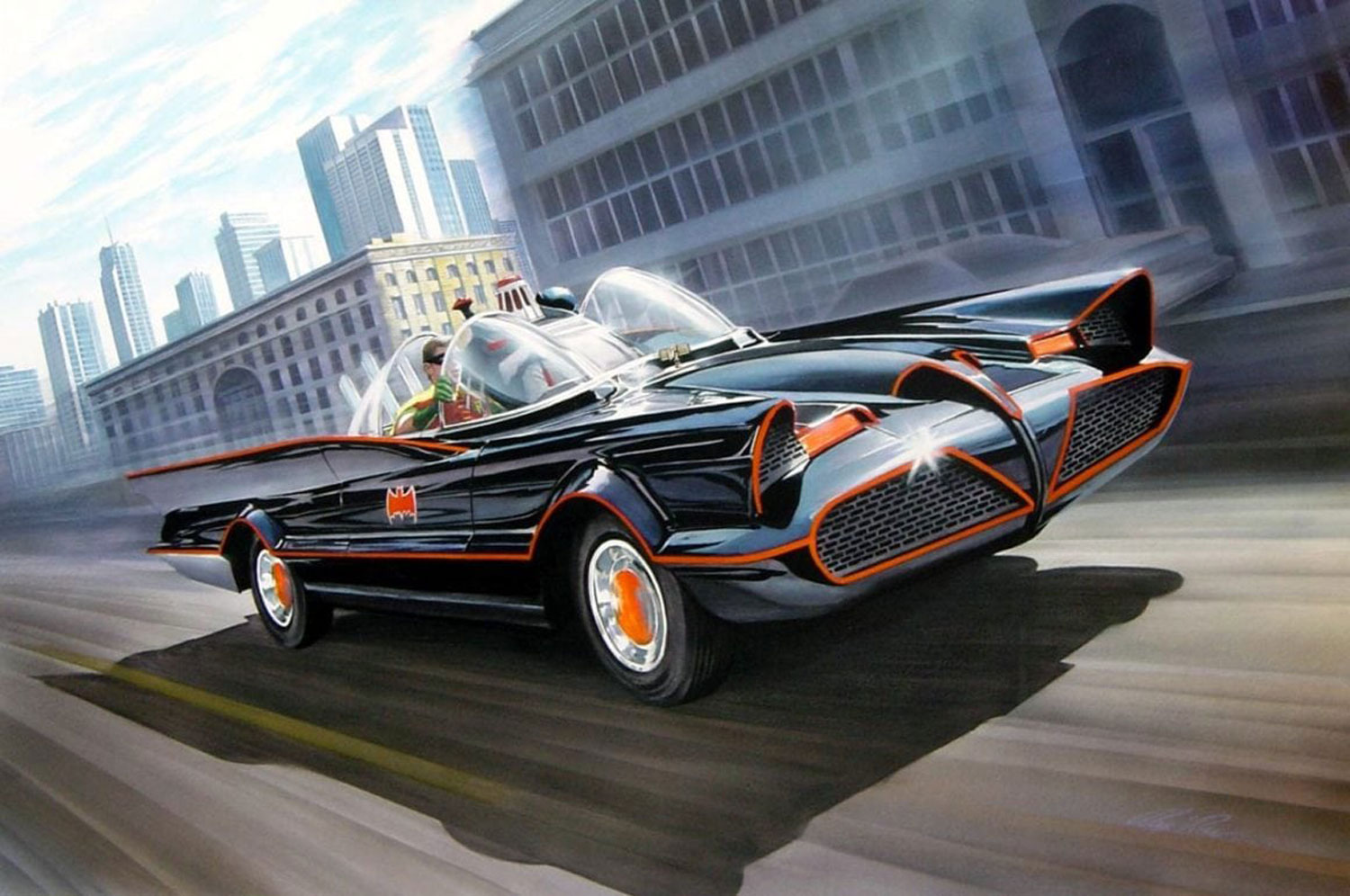 Ghia returned the completed Futura to Lincoln-Mercury Division on January 5, 1955. By the middle of that month it was on display at the Chicago Auto Show; then it was off to the Detroit and New York Auto Shows. When in New York for the auto show there, the Futura was driven by Benson Ford on city streets where it all but stopped traffic. Everywhere the Futura went it drew huge crowds. After the show circuit, The Futura was shown at fairs, races and in some Lincoln dealers’s showrooms. By 1959, there were newer concept cars that took it’s place on the show circuit. When not on display somewhere, the Futura could usually be seen at the Ford Rotunda.

By 1959, George Barris was doing some customizing work for Ford. He arranged for the Futura to appear in the movie “It Started With A Kiss,” staring Glenn Ford and Debbie Reynolds. During its film test the studio determined the Futura’s pearlescent paint didn’t film well, so Barris repainted it red. After the movie, the Futura was returned to Dearborn where it appeared in a 1963 Ford film about the Design Center. After that, Lincoln-Mercury Division returned the Futura to California, where it was parked at either MGM or outside at Barris’ shop while Barris was trying to find other TV or movie roles for it. While at Barris’ shop, parts were taken or lost, the red paint faded and the Futura generally deteriorated.

Back In Dearborn, George Walker retired as head of the Ford Styling Center in May 1961. At the time, Henry Ford II was in bed with mononucleosis, so Bill Ford was able to engineer Gene Bordinat’s surprise appointment as a Ford vice president and head of the Styling Center to replace Walker. Bordinat thought the 10% of the Design Center’s budget assigned to discretionary projects could be better spent not on expensive concept cars but on cheaper to build customized production cars. Bordinat also thought Detroit area metal shops charged too much, so he asked Dave Ash, a Ford designer he had worked with since their time at GM in the 1940s, to interview California customizers to find out what they charged and who would most likely follow precise directions and schedules when customizing Fords, Lincolns and Mercurys into show cars. Ash, cost analyst Jim Cappolongo, and L-M representative Harry Miller, all flew to California to interview customizers. After interviews, Barris in Hollywood and Gene Winfield in Modesto were chosen to each build a show car from a production Ford product based on detailed designs prepared by the Ford Design Center and on a specific time schedule they were given. Winfield built a car called the Constellation, and Barris built the Mercury Super Marauder.

During the time the cars were being built, Ash would fly out to California every two weeks to supervise the builds. Sometimes Ash would stay and do work on either or both cars to help keep them on schedule. Ash enjoyed Hollywood more than Modesto. Barris introduced Ash to various Hollywood personalities, took him to Hollywood parties, and generally entertained and showed him the town, all of which Ash thoroughly enjoyed. Needless to say, Barris was chosen to build multiple show cars for Ford. While Barris was building show cars for Ford, he was also encouraging Ford to give/sell him the Futura so he could be more effective in getting it into movies or on TV.  By letter agreement in December 1965, and countersigned in May 1966, Ford Division sold the Futura to Barris for $1 “and other consideration.” Because of the constant contact between Barris, Bordinat, Ash and other Ford personnel, it is probable that Ford was aware of Barris’ plan and his negotiations with studios to turn the Futura into the Batmobile. According to Ash, the alternative was to destroy the Futura.

In September 1965 (before the sale),  Barris signed a 13-page written contract with Twentieth Century Fox Television and Greenway Productions to turn the Futura into the Batmobile. The studios paid Barris $5,000 to make the modifications needed. Barris then subcontracted the metal work to Bill Cushenbury, who had a shop just down the street, and gave him oral directions on the work to be done. Cushenbury said extending the fins forward into the doors was the hardest part of the build. When the metal work was completed, Barris painted the car black. Barris then rented the Batmobile to the studios for $150 per episode during the Batman TV series. There were 120 episodes of the Batman TV series shown between January 1966 and May 1968. Barris also collected other monies from the studios during the series, including money for building a backup Batmobile, but he wisely kept the design rights and the right to publicly display the Batmobile.

In March 1966, Barris applied for a patent on the Batmoble, which was granted in October 1966. It’s anybody’s guess how much Barris made when displaying the Batmobile or one of the five replicas he made, but over the years the Batmobile was a cash cow. In 1973, Barris included the Batmobile in an auction he held for many of his movie cars, but the Batmobile did not meet the reserve of $5,000 and went unsold. In 2013, Barris did sell the Batmobile at auction for $4.6 million. Holy bat fuzz!

Part III is a 1995 interview with George Barris about the Batmobile.

Don’t miss the last photo after the gallery.

To The Bat Cave! 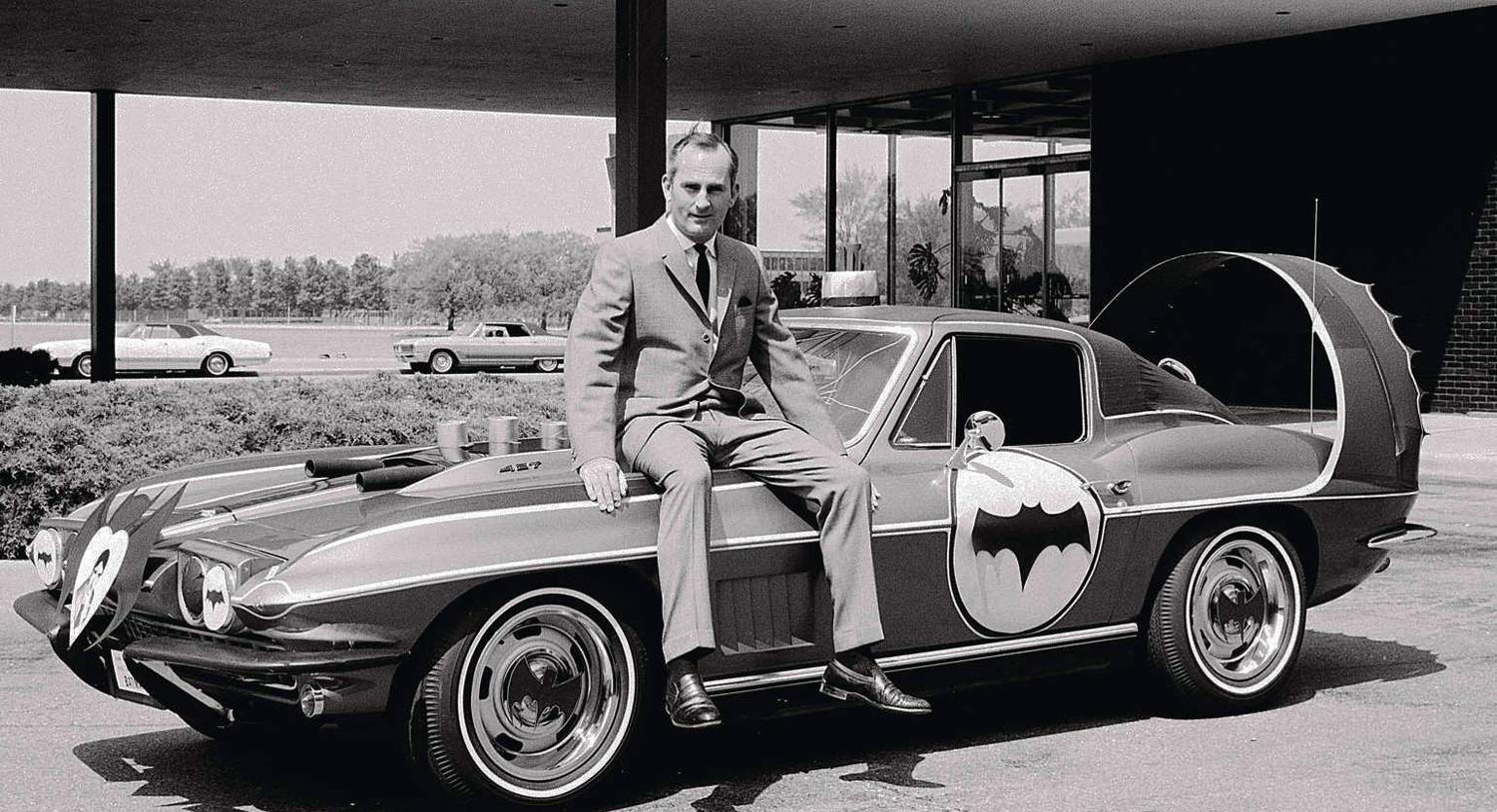