Care to hazard a guess how many have been at Buick’s helm since 1899 to well into the 2000s starting, of course, with David Dunbar himself and not counting Charlie Nash twice? Or which two of those twenty-three men guided Buick, thus influencing the most cars and the division’s future far past their respective tenures?

One of the men—the one about whom much has been written—was Harlow Curtice. The other, equally accomplished and influential was also truly self-effacing preferring that the light shine on his various team members and the Buick cars themselves. These words, then, will focus on Edward H Mertz, the man, his career and accomplishments—and his life.

Wayne Kady, head of one of Buick’s two exterior design studios during Ed Mertz’s years as the division’s General Manager, expressed it well: “In all my years with GM, I never worked for or with a man who valued all employees as much as Ed Mertz did. He made each and every one feel as though we mattered. He would hear each person out whether or not he was in agreement for he truly wanted to hear and understand each person’s perspective.”

Few knew, for Ed rarely spoke of himself, that he had been born into a GM-family as his dad had, after numerous other assignments and employers ranging from Hudson to finally GM, become as he neared his own retirement in the mid 1990s a Chev truck engineer with, as Ed had related to me in 1999, “a heavy hand in designing those 1994-95 bodies.”

His parents made sure their son’s desire to attend South Bend, Indiana’s Notre Dame University was fulfilled and Ed rewarded their support as the 50s morphed into the next decade by achieving his Chemical Engineering degree. Equally important during those growing up years, his folks had ensured Ed would be left- and right-brain accomplished. Ed recalled, “Dad was developing photos he’d taken in a makeshift darkroom when I was around 6 or 7. I was fascinated. My interest continued through school years and I was a staff photographer for Notre Dame’s paper as well as its yearbooks.”

Once hired by GM, job demands took precedence although, over the next years/decades, Ed explored and developed other hobby skills ranging from making fine cabinetry and researching family genealogy. This latter interest brought about an interaction with a Buick Club of America member’s mother that Roberta Vasilow was only too willing to share as it has meant so much to her family.

“Ed and my mom connected when she was doing genealogy on Prodigy. He had found a relative that she had found so they became email friends. He then sent her the Dunham/Gustin book and autographed it to her. With Mom now gone I have that book. The next time Mom ‘saw’ Ed was when he was featured in the video about the then-new ’95 Riviera that was shown at the BCA’s 1993 Great Lakes Regional Meet in Flint. Mom pointed at the screen saying ‘I want!’” Roberta, herself now retired from a career as part of GM’s engineering staff went on to explain: “I was promoted in 1994 so the first company car I ordered was 1995 Riv and Mom got it. Today that Riv has around 97K on it and is my daily driver!”

Summer 1956, a job for a few weeks in a Chevy test lab gave Ed an idea of what working within the corporation was like. As graduation from Notre Dame with a degree in chemical engineering degree neared, he received employment offers from the likes of DuPont and Union Carbide as well as Chev, with the latter offering not only a better starting salary but a better position as well.

It was truly “right place, right time” as Ed described it to Ellen Grimes of the Dallas Times Herald in a recorded interview in 1990. “When the first emissions laws were enacted, all the carmakers suddenly needed engineers with very strong chemistry backgrounds. My name came up…as an employee with both engine design experience and a chemical engineering degree.”

Then lady luck intervened too in the form of a manager who was willing to take a chance on Ed succeeding by “moving me out of engines and gave me the opportunity to work on the ‘whole car’, which is balancing and integrating all systems to come up with a total vehicle that makes sense to the driver and has the qualities buyers want. It is a fascinating series of design challenges and not something many engineers get experience with so early on. It was exciting being involved in the beginning of a completely new kind of technology.”

GM proceeded to put one challenge after another before Ed, at last rewarding him—and us—naming him in 1986 with a corporate vice presidency and specifically as the General Manager of Buick Motor Division from which he would retire ten years later after a total of 40 years with the corporation. But, oh my, from a Buick perspective, what a decade it would be and how it would effect and guarantee Buick’s future!

Again from Ed’s conversation with Dallas newspaper reporter Ellen Grimes, “A lot of time was spent [in the beginning] focusing on the historic strengths of Buick. Getting that message relayed throughout the division was a challenge. It takes time to get an overall product theme translated to every employee. Buick holds an historic place in American life. Historically Buicks have also displayed a certain style. You could tell a Buick from blocks away.”

With that, Ed embarked on assembling a management team and each, in turn, imbued their staffs with an understanding of Buickness. First vehicle “out the door” under the new regime was Regal, soon followed by Reatta, then the elegant and graceful Park Avenue and, fulfilling the powerful mandate, the super-charged Ultra. Then there was the return of Roadmaster; first the wagons in 1991, then the sedans the following year. Could it get better? How about the totally re-styled and –engineered Riviera! And don’t forget the emphasis on quality of build—all of which earned the JD Power Quality awards year after year especially with LeSabre.

By the time Ed Mertz retired concurrently from Buick and GM early in 1997, his influences and policies had built the division so solid and strong, and with sales to match, that even as the auto industry and GM subsequently experienced extreme challenges that ultimately resulted in both downsizing and corporate reorganization, Buick remained one of the surviving marques. Thank you Ed.

Ed Mertz was an equally able engineer and administrator, traits normally attributed to those termed left-brained. But he was also one of those less common individuals whose right-brain was equally dominant. In retirement he had the time to let his artist’s heart and soul—and eye—have free rein.

Once again picking up the camera, albeit now a digital one, Ed roamed Arizona to which he and wife Alice had moved. They also took a People-to-People/InFocus trip to Cuba. The images Ed created were, and are, special. So special that the City of Scottsdale asked Ed to create a special 12-foot-long, 2-feet-tall Pano image to install at the beginning of the McDowell Mountains Bajada Nature Trail. And the Mayo Clinic presented his work in a one-man show early in 2008, with another in the hospital the following year. Ed self-published books showcasing his award-winning images. One of those books presented the sights and cars they had seen on the streets during that visit to Cuba. All may be viewed and admired by visiting the pages of EdMertz.com.

Time eventually runs out for all of us. Ed Mertz, who had been born March 12, 1937, went to his reward this past August 20th (2020). Just as he valued the heritage of Buick kept alive by BCAers everywhere, so too should club members and others value and thank Ed Mertz for enabling and ensuring Buick remains viable to this day. 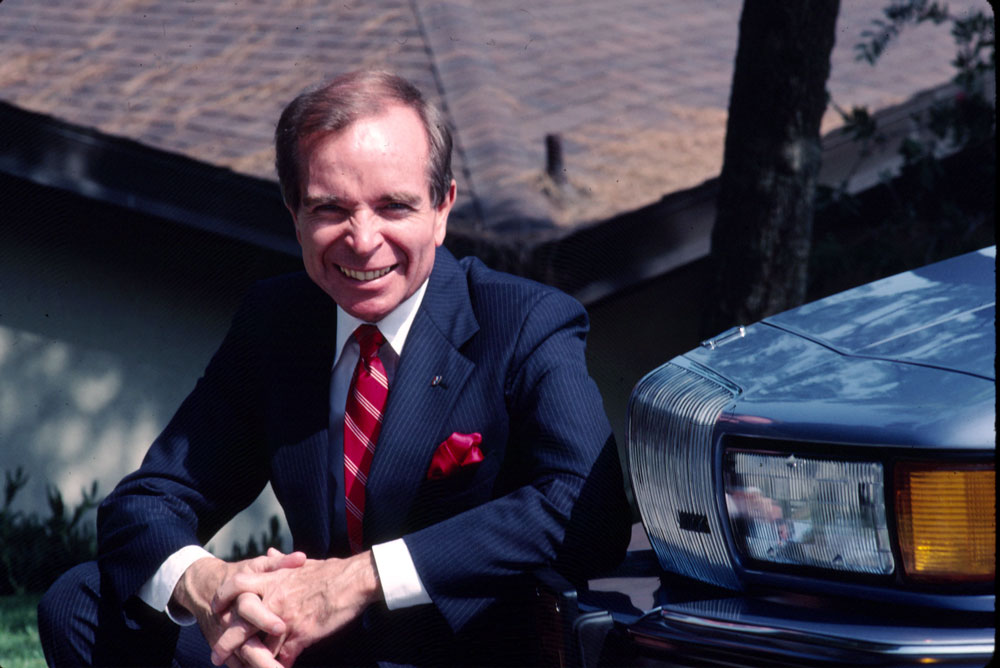 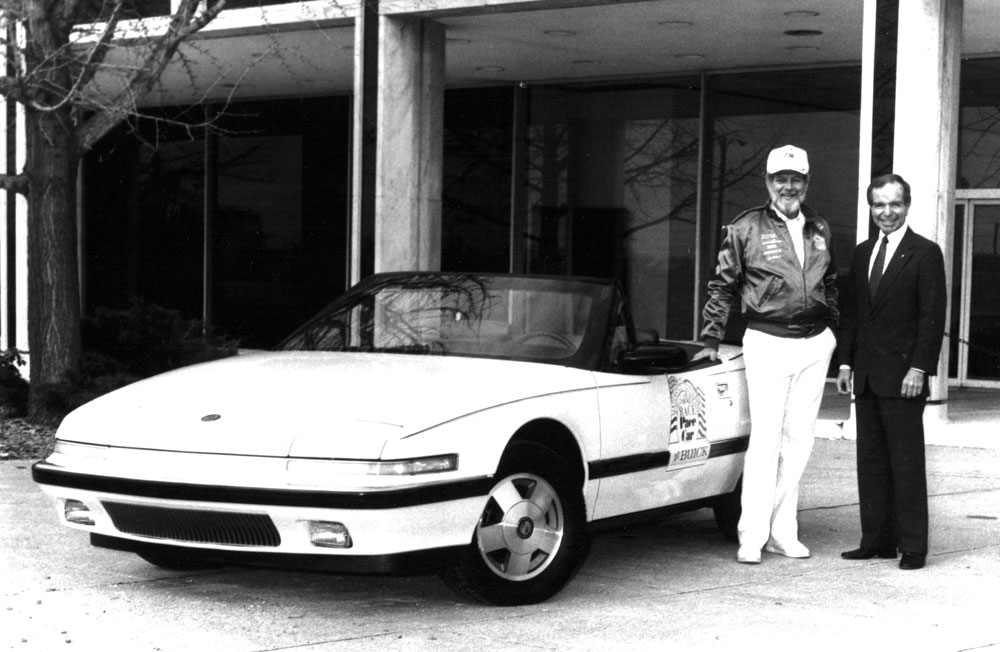 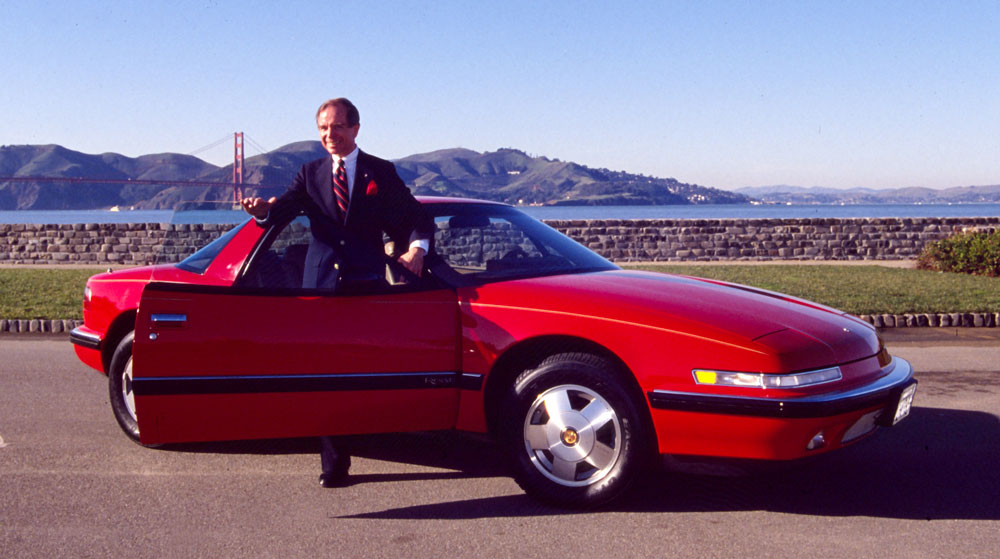 Ed Mertz at the Reatta introduction to the San Francisco Bay Area press in 1988. 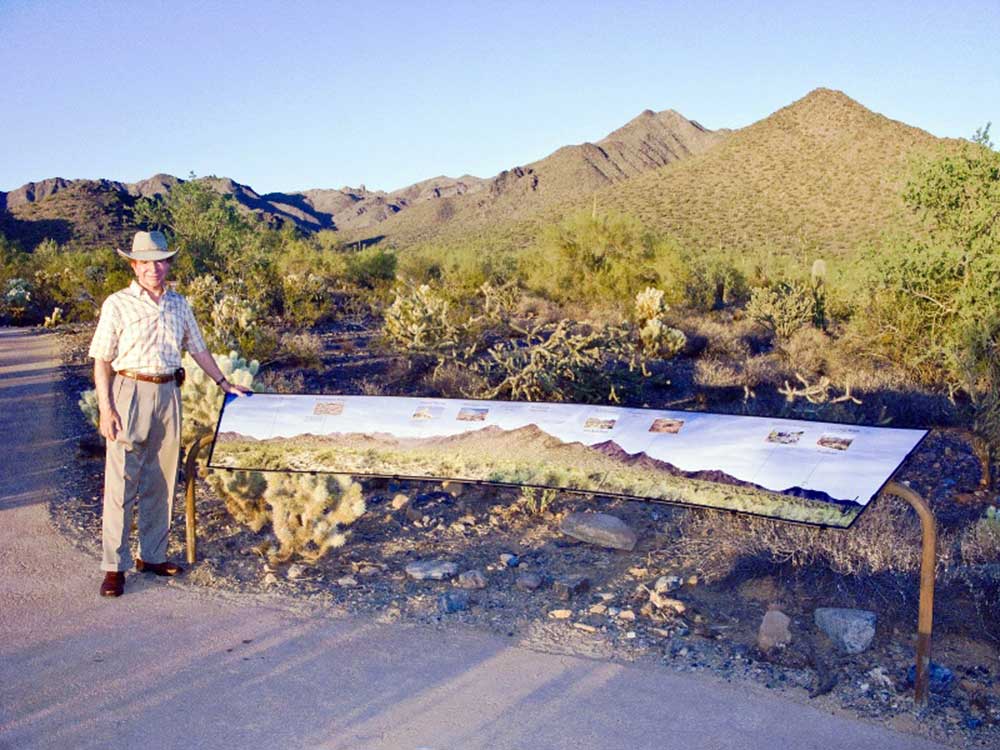 Ed with the Pano he created at the McDowell Mountains Bajada trailhead.

My first toe-wetting into the collectible car world in 1979 was precipitated by my dad’s unexpected and sudden death. A car was the only tangible thing he left. But what a car and one I had loved since the day he acquired it, a 1939 Buick Model 41C—a driver, not a showcar. Quickly I joined the Buick Club of America and my local chapter too, then not long thereafter AACA and CHVA in order to learn more.

A scant few years later Buick Motor Division hired me to provide public relations services on contract; my official title Western Regional PR with “the West” defined as everything west of Mississippi River thus I was the entire Western Region PR “staff” for a decade coinciding with the years Ed Mertz headed the division.

During those years Pete Biro served as Drive! magazine’s editor, I wrote a regular column on “Art, Books, Collectibles” and produced another publication focused on artists and their automotive art creations. Post GM/BMD I became the managing editor and a major contributor (also copy editor and proof reader) for a beautiful, but sadly, short lived magazine called Auto Aficionado whose owner/publisher and editor had, sadly, “arranged” to pay themselves while stiffing the rest of us. Such are life’s vagaries!

While working for Auto Aficionado I became acquainted with AOAI and its Avanti Magazine which I now serve as copy/proofing editor and contributing writer in addition to writing articles and book reviews for a number of other publications including SpeedReaders.info and the Society of Automotive Historians’ Journal.