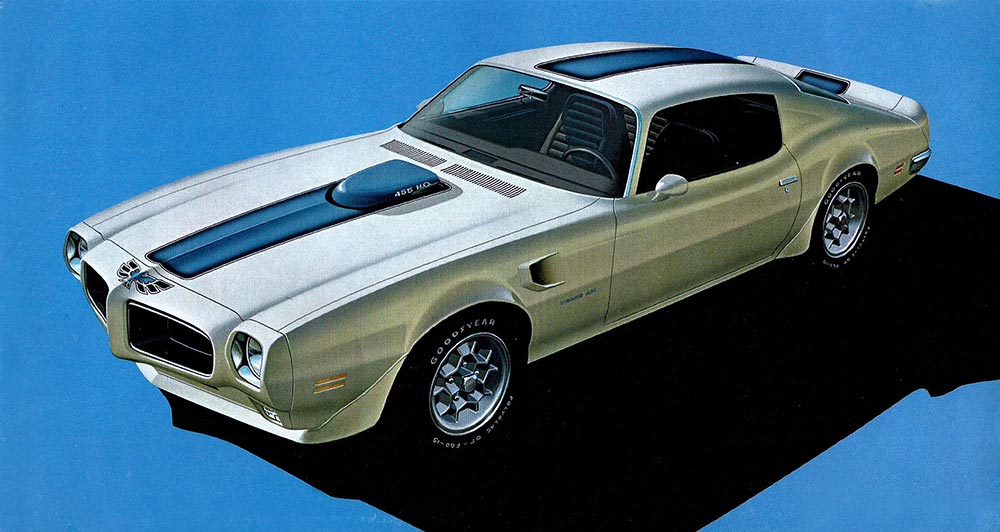 “I don’t think You’re man enough to take on a car like this.” Lightfoot (Jeff Bridges) has just walked into Pete’s Dependable Used Cars somewhere in Idaho. He eyes up a Cameo White ’73 Trans Am with a red “shaker.” “It’s a repo. Three thousand and change,” says Pete. Seconds later, the Trans Am is flying through the western countryside, stolen. Movies made the Trans Am an American legend.

Tom Glatch tells the inside story of the Trans Am’s impact on the culture (and sales) through it’s starring role in several motion pictures and TV shows. Clint Eastwood in Thunderbolt and Lightfoot drove a Cameo white ’73; John Wayne’s Brewster Green ’73 in McQ; and David Carradine’s red ’73 in Cannonball. 1977 introduced Burt Reynolds driving a black TA “Bullet” in Smokey and the Bandit, and later in Hooper. “Ain’t nobody can fly a car like Hooper.” Steve McQueen drove a ’80 TA in Hunter. Steve died four months after the film was released. In the early ’80s David Hasselhoff starred in the TV series Knight Rider that featured KITT, the talking Trans Am. Tom reveals many inside details about the making of the films, how the cars were procured, and what became of them.

The book quotes many designers and engineers who had something to do with the Trans Am. Norm Inouye drew the famous flaming bird graphic based on a sketch by Pontiac Studio Chief Bill Porter. After a flaming initial rejection by Bill Michell, it finally became an option beginning in 1973. Porter recently commented, “I think it may have saved the car. In the mid-seventies, everything was going against the Firebird, and I’ll put he case forward that the Trans Am bird saved it.”

Enzo Ferrari gave Bill Mitchell a 347 horsepower V-12 from a Ferrari Daytona 365 GT/B4 for his customized Firebird, Pegasus. The motor was a tight fit, and the author states that the firewall was moved back nine inches to accommodate the longer engine. However, you can clearly see that there were no modifications made to the interior or the wheelbase of the Pegasus. The V-12 was shoehorned in by taking up the space occupied by the stock fan and fan shroud.

As an added bonus the author devotes several pages to the development of the 1989 Turbo Trans Am, the fastest four-seat American car of the 1980s. Pontiac built two Trans Ams in 1986 with the Buick Turbo 3.8-liter engine. But for the engine package to fit, the passenger-side fame rail was modified to make room for the exhaust downpipe. Production was not feasible, because the car would have to be re-certified at great expense to meet government crash standards. Using the standard Trans Am transmissions was also a certification issue.

The PAS team was brought in to see if production would be possible by other means. Bill Owen of Buick, the primary engineer behind the Turbo V-6 engine, came up with the idea of using the cylinder heads from the front-wheel-drive 3800 V-6 to narrow the width of the engine and make room for the transmission bracket so that the entire Grand National engine/transmission package would fit, along with the different heads. With this, the first production-ready Turbo Trans Am was born. Lloyd Reuss, executive vice president for GM’s passenger car group at the time, drove the gray-on-gray prototype and decided he wanted it to be the 30th Anniversary Trans Am.

Pretty interesting stuff. There are a lot of similar insights in the book.

By the way, in the gallery there is a shot of five ’77 TAs and a GMC motorhome that was part of the Trans Am Territory promotion. It is included in Michael Lamm’s great book, The Fabulous Firebird. One day at GM Design they picked out several TAs in the parking lot for the shoot. The yellow TA was my car. The Turbo Trans Am in the photos is my car.

Pontiac Trans Am 50 Years is nicely designed with a matte coated dust jacket and an embossed hard cover. The inside front and back covers have full two-page spread photos. There’s ample white space and legible type printed on matte stock that makes for easy reading. There is a running footer with chapter titles and page numbers, and the book is fully indexed.

Images from Trans Am 50 Years

Pegasus and Turbo Trans Am images

Pontiac Trans Am shows this dominating machine’s full history, from early days burning up both race tracks and Hollywood to its final days as the most potent muscle car made.

The early 1960s saw American auto manufacturers desperately trying to sell cars to the emerging baby-boom market. Pontiac attained success with its original muscle car, the GTO, but as successful as the GTO was, it was handily outsold by Ford’s grand-slam home-run pony car, the Mustang. In response, Pontiac entered the pony car market in 1967 with its new Firebird, a model that became one of the most iconic cars of the classic muscle-car era.

Introduced for 1969, the Trans Am version Firebird of the Firebird became the standard bearer for automotive performance in the U.S. market and kept the muscle car flame alive throughout the dark years of the 1970s and led the charge when performance reemerged in the 1980s. When muscle cars became dormant for a generation it was once again the classic pony cars that jump started American performance.

The battle that raged between Firebird, Camaro, and Mustang in the 1980s rejuvenated the U.S. auto industry’s interest in high-performance muscle cars and the Trans Am remained the most potent car of the lot until the bitter end. Pontiac Trams Am: 50 Years chronicles this ultimate version of the Firebird’s rich history, from the early attempts to reach the youth market in the early 1960s, through the potent and turbulent years of the classic muscle car era, the resurgence of muscle in the 1980s, to the car’s continued popularity in both the automotive world and in popular culture today.

Since 1983, Tom Glatch has contributed hundreds of stories and photographs to major collector, Corvette, Mustang, muscle car, and Mopar magazines. Tom grew up during the muscle car era, and his first car was a very quick 1970 Plymouth Duster 340. Tom and his wife Kelly have contributed photographs to books by other Motorbooks authors, as well as Motorbooks’ Corvette calendars. When not pursuing old muscle cars, Tom works for a Fortune 500 corporation as a data and systems analyst and developer. He lives in southeastern Wisconsin.