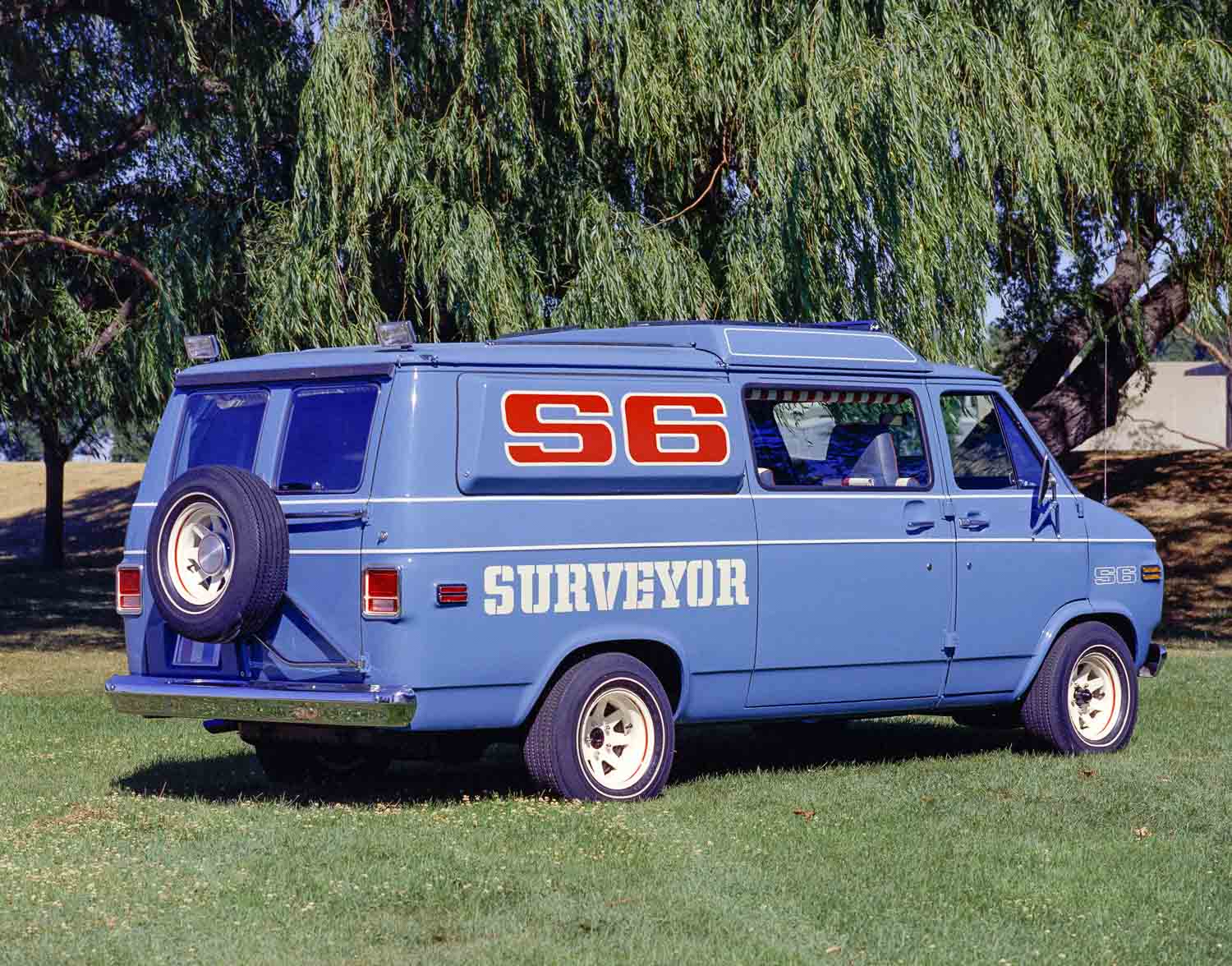 Background: I was talking to Bernie Smith on the phone recently, and he casually mentioned that the last time I went riding with him, his son, and others, he used the Surveyor to transport his bikes. I had no recollection of the van, so went searching. I found the Hot Rod article, then contacted GM for some photos which they graciously provided.

The ultimate van? That’s quite a statement these days. There are literally thousands of special vans throughout the country that have been modified to suit the owners’ needs, whether he be motorcyclist, camper or just a dude smart enough to realize that a van makes the best second car. So how come this one particular vehicle is special enough to be called the ultimate?

Once you spend a few minutes looking at it the answer becomes obvious. It’s one of those cost-no-object jobs that occasionally roll out one end of the vast General Motors Design Staff. While we’re used to seeing Corvettes or Cadillacs in exotic garb, the result of the fertile minds of design chief Bill Mitchell and his staff, it seems strange that a truck (for that’s really what a van is) should receive that classic “silk purse out of a sow’s ear” treatment. Especially when that special truck has the best interests of the motorcyclist at heart.

Part of the reason for that is the fact that “the boss,” William L. Mitchell, is himself a motorcycle enthusiast. Owning a minimum of a dozen machines at any time, he no doubt ran into the same problem that motorcycle riders the world over have long been aware of. There are few vehicles that are really suitable for transporting both bikes and riding gear in an organized manner. Together with GMC Truck and Coach honcho Alex Mair, another avid biker, Mitchell set out to build the ultimate van out of a peasant model GMC Vandura. Six months and about $100,000 later the Vandura became the S-6 Surveyor.

Trucks are built by truck people so the responsibility for the S-6 was passed to Mike Lathers at the Design Staff. He’d headed up the successful GMC motor home project as well as any number of other “commercial” ventures that fail to get exposure in spite of their definite contributions to GM profits.

Lathers was quick to research the two-wheelers’ needs, consulting with a vast number of GM employees who ride bikes and also own GMC vans. He also invited input from PPC’s own Motorcyclist magazine, a contact that led to many of the innovations that the S-6 features.

The problem was quickly pinpointed. Vans lack storage space for the essentials that go along with two-wheel sport. By the time three bikes are loaded in a conventional van, there’s no space left for anything else. Lathers came up with some saddlebags: fiberglass pods that replace the conventional rear side windows and provide storage space for boots, leathers and helmets. They’re accessible from the outside, making it unnecessary to crawl under, or climb over, the bikes in the van.

Next he turned his attention to all that wasted space beneath the rear bench seat. By designing an entirely new module, the rear seat became a double-size bed as well as a tool box that is hidden when you don’t need it and yet becomes a portable workbench when you do. Since the side door had to be rehung with hinges at the front to clear the protruding saddlebags, it provided a natural location for an awning over the struggling mechanic using the toolbox. Rough life.

Everything so far is pretty practical. How about something dazzling? Like what? Like an electrically operated rear door that changes from door to loading ramp with the turn of a key. The S-6 has it and it is guaranteed to draw a crowd any time it’s operated. How about a sliding sunroof that doubles as a race-viewing platform complete with guard rails? The S-6 has that too. It also has wheelwells in the rear floor to accept three front wheels. It has a double battery system that allows the use of all the electrical systems at a campsite without fear of running out of juice once the times comes to leave for home. And let’s not forget the rear door awning and the high-back swivel seats and the AM/FM-tape and the Cibie driving lights and the T&H front spoiler and the Tacoma wheels and the B.F. Goodrich tires and the Hooker headers and the other Cibie rear lights that go on as soon as the rear door opens. Or the indoor-outdoor carpeting and the Firebird gas tank and the build-in Ancra bike tie-downs, custom-made in blue since Ancra only makes red ones. Let’s not forget that every fitting, every piece of bracketry or reinforcement that has been added is brightly chromed, a fortune in itself. And the fact that the chassis had to be modified to lower the floor to support the side door and retain structural integrity once that huge hole was cut in the roof. Let’s not forget this, and the fact that the “Surveyor” and “S-6” are decals, not hand-painted one-offs, and we may begin to realize that it really does qualify as the ultimate van. That qualification is twofold; it is very, very functional and yet it has the class of a rear-engined Corvette. What biker wouldn’t want it?

“Its not a van, it’s a place” is a good description of the S-6, so named because of its six separate systems intended for recreational use. The sliding toolbox, or “camper hamper,” incorporates its own workbench. Side pods for extra storage can be opened from either inside or outside, locked for security. Custom rear bench seat folds into 4-by 6-foot bed. The electrically operated tailgate serves double duty as a loading ramp. Makes loading bikes a breeze. Combination sunroof and viewing platform has fold-up guard rail and carpeting. Both rear and side doors have their own roll-out awnings, providing shade for working in the field. Stock 350 engine gets a boost from Hooker headers and sidepipes. Weight is carried by B.F. Goodrich on Tacoma wheels.

Check out Mitchell’s other custom bike hauler, the Dragon Wagon, on Dean’s Garage.