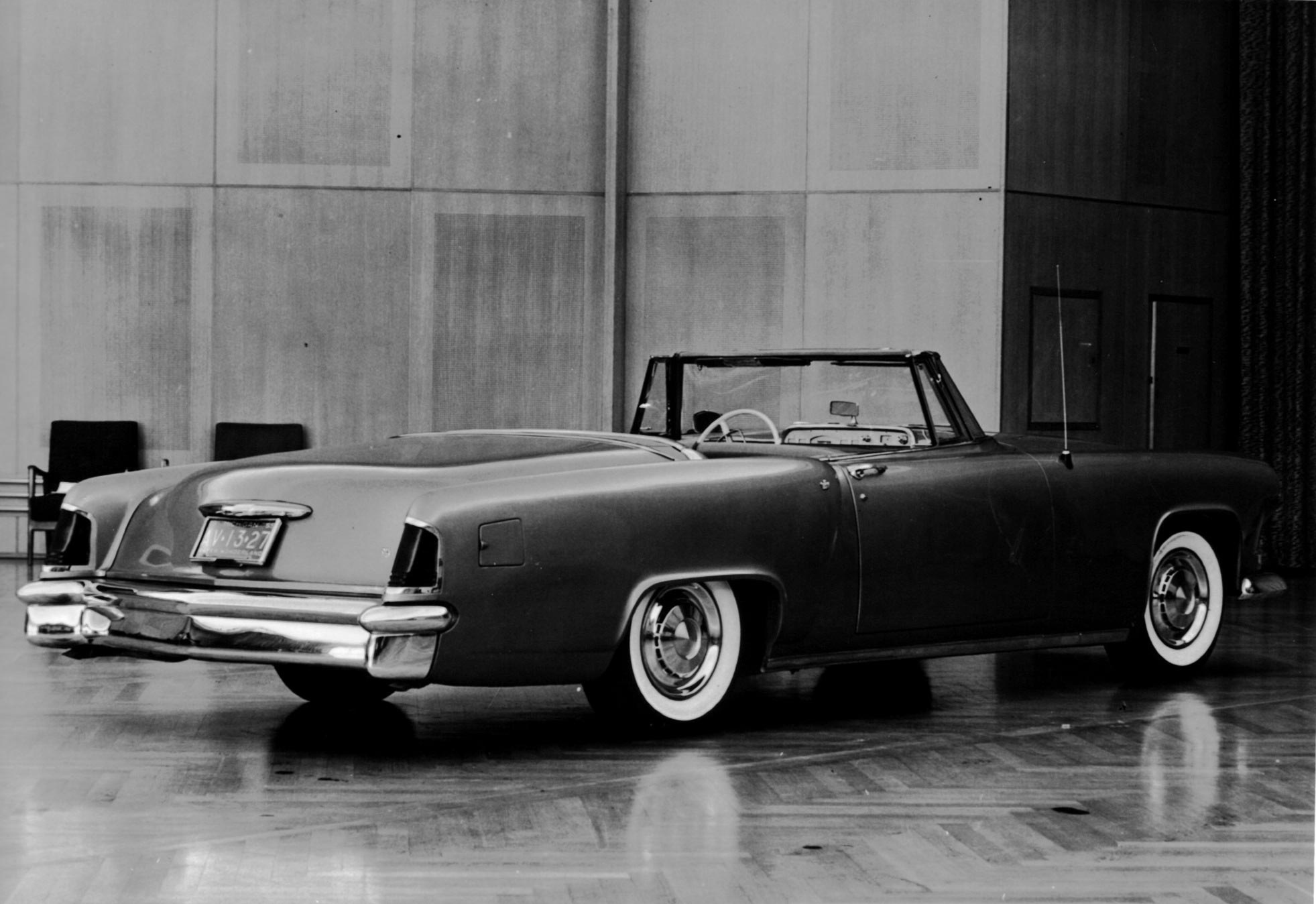 Bill Ford, Edsel’s youngest son, completed a four-year apprenticeship at Ford in 1952. That apprenticeship included time spent in all aspects of Ford’s operations. Even before he finished, he was offered an opportunity to resurrect his father’s Continental, something he jumped at. Because he was not yet 30 years of age, he was paired with Harley Copp, a seasoned engineer, who was seen as a good fit personality-wise for Bill Ford. Copp’s job as the Continental Mark II’s chief engineer was also to teach Bill Ford the “car business.”

As they began developing their plans for the Mark II in early in 1953, Ford and Copp visited Gil Spear’s Advanced design studio. After examining the Syrtis and reading Spear’s booklet explaining the process, they decided to include a retractible model in the Mark II lineup. Ford’s board of directors authorized $2.19 million to build a Mark II retractible. At the time the Mark II project was started, there was a shortage of designers and engineers at Ford, so Bill Ford was told he had to hire most of his people from outside the company. Harley Copp’s brother-in-law, John Hollowell, whose expertise was linkage, was hired to lead the retractible program and given 18 months (until January 1, 1955) to develop a working Mark II retractible. The place Hollowell was given to do the job was in garage building #19, next door to the old Lincoln plant at E. Warren and Livernois streets in Detroit.

Hollowell had to find and hire most of the 105 engineers who built MP#5, the Mark II retractible prototype. The directions Bill Ford gave Hollowell were that the retractible top had to be fully automatic; the roof had to fit the Mark II; none of the other exterior dimensions of the Mark II could be changed; the trunk had to open from both front and back; and the backlight had to roll down. Two “mules” made from 1953 Lincolns to the dimensions of the Mark II were ordered from Hess and Eisenhardt. MP#5 was made from one of those mules. (The other was sold and the chassis was used for the Lincoln Futura.)

By the time the retractible project was started, the basic design of the Mark II had been determined, so designer Ray Smith was assigned to work with Hollowell’s group to make sure MP#5 ended up looking as much like the Mark II as possible. Because the Mark II was designed as a 4-passenger car, Hollowell came up with an articulated (flipper) roof that folded under as it went into the trunk. The deck also had to be raised slightly to accommodate the top when retracted, and the back seat was moved slightly forward. The 2-way opening deck lid and roll-down backlight were later abandoned as unworkable, and the small modifications to the Mark II body were not seen as enough to worry about.

One of Hollowell’s first hires was Ben Smith, an expert on convertible tops. Hollowell had worked with Smith before on the small Ford project in the late 1940s. Once hired, Smith recommended a friend named Roy Butler, who had worked with him at GM. Hollowell, Smith and Butler were the leaders among the approximately 105 engineers who designed and built MP#5, and they finished it within seven days of the due date. Because of early disagreements between the engineers, Bill Ford signed a written order naming Hollowell as the final authority on anything to do with MP#5.

In April 1954 Bill Ford commissioned a survey of potential Mark II buyers to find out if they would pay an extra $2,500 for a retractible model. Surprisingly, 90% said yes. In May 1954, a working retractible mechanism on a static buck was completed. By mid-September, Ford Division became aware that Hollowell was likely to succeed in building a Mark II retractible, and soon all divisions expressed interest. That same month Hollowell, Smith and Butler filed for a patent on their retractible mechanism. (It was granted in November 1958, and assigned to Ford Motor Co.)

On November 11, 1954, the working buck was shown to Benson Ford, Lewis Crusoe, Ben Mills and Robert McNamara. McNamara became so enthusiastic, that he was convinced retractible models could replace convertibles. MP#5 was finished on December 9, 1954 (except for some trim pieces), and on January 7, 1955 Hollowell took Bill Ford, Ben Mills and Harley Copp for a ride in MP#5. When Ford’s board of directors was shown MP#5, the top was retracted about 25 times until the car’s battery almost wore down. Ford’s board gave MP#5 a huge round of applause, and soon Ford’s designers were developing clay models for all of Ford’s divisions. (Full-sized clay models of the ’58 Edsel and Thunderbird were completed.)

By the first part of February 1955 it was decided to build—not a Mark II retractible—but a Ford retractible. Reasons given included the Mark II’s precarious financial condition and because Ford’s board supposedly did not want to include untried technology on Ford’s flagship car. Ben Mills, who had been assigned to help manage and improve the Mark II’s finances was able to sell the retractible technology to Ford Division together with the development of a Ford retractible by Continental Division engineers.

Hollowell left Continental Division for Lincoln Division when the Ford retractible project was just getting under way. Hollowell’s job at Lincoln Division was to determine if a retractible could be engineered for the much larger Lincoln planned for 1958. He determined it could, and was able to develop detailed plans, but because new linkage would be required, cost was more, and it would take 13 months to build a working Lincoln retractible. After his job at Lincoln Division was complete, Hollowell was hired by Ford Division to help engineer the unibody ’58 Thunderbird, including modification of the retractible mechanism for their convertible model. Smith and Butler and the rest of Continental Division’s engineers adapted the retractible mechanism to the ’57 Ford, but because of the roof design of the ’57 Ford, it was not a clean looking adaptation.

What happened to MP#5? The car was driven around the Dearborn/Detroit area and taken home overnight by Hollowell, Smith, Butler and many Ford executives, but mostly by Smith. In summer 1957, when Smith returned from vacation, he was shown a scrap order showing that MP#5 had been destroyed. It has not been seen since. There have been persistent but unconfirmed rumors that MP#5 was not scrapped but is in someone’s garage awaiting restoration.