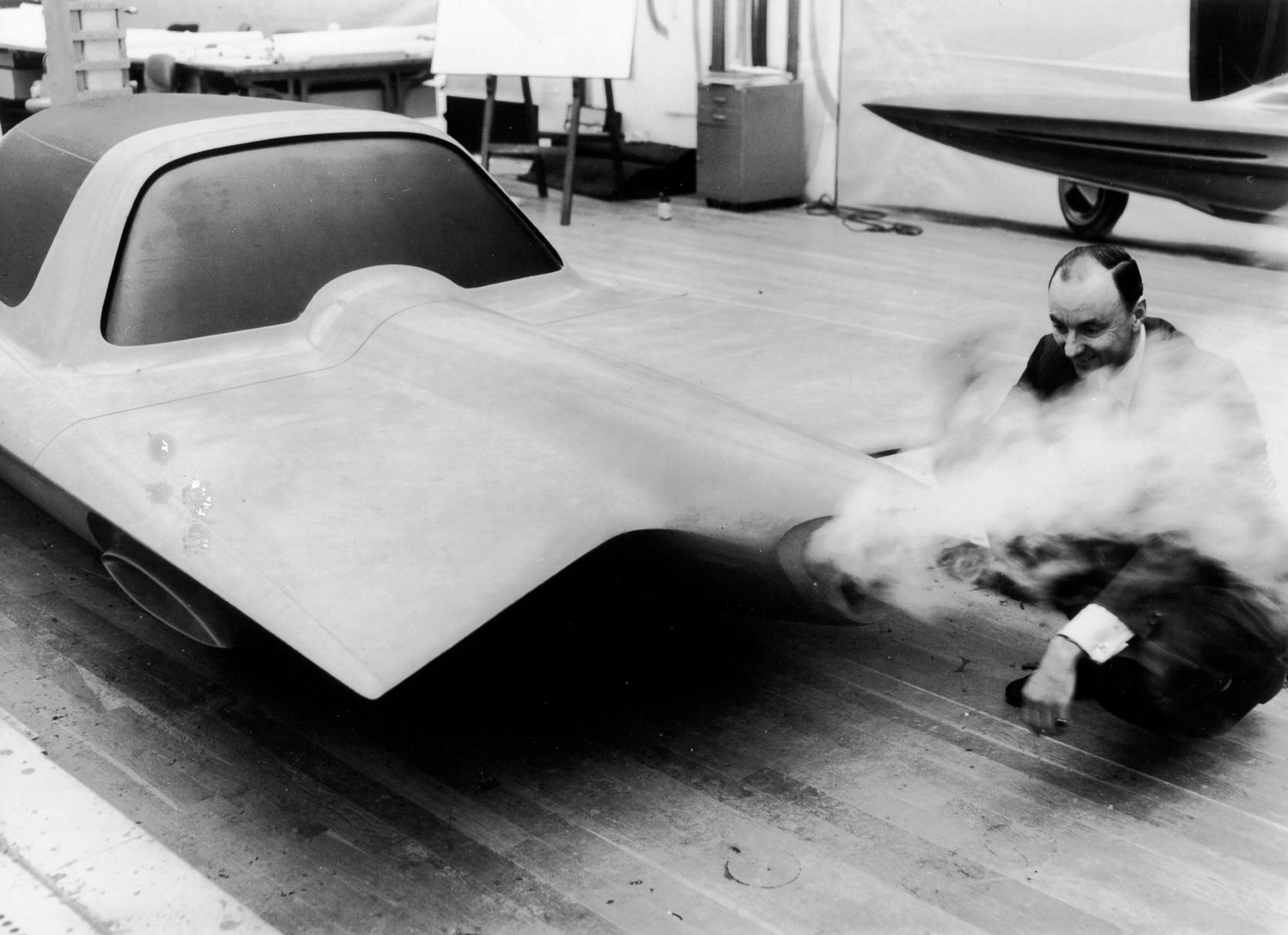 When the Gyron concept car was unveiled in 1961, few people realized it had taken five years to create. The idea came from Alex Tremulis, a Ford designer, who intended the Gyron as his answer to GM’s Firebird III. Starting in 1956, Mac Thompson and other young Ford designers worked on the Gyron. The final design of the Gyron, however, was created by Tremulis several years later, with lots of help from designers Elwood Engel, John Najjar, Gale Halderman, Syd Mead, Bill Dayton, and Phil Payne who were all assigned to Engel’s Corporate Advanced studio at the time.

Tremulis always said the Gyron was his ultimate aerodynamic design. He believed the Gyron was a breakthrough design that would influence all future car designs.

Approval to build the full-sized Gyron show car came after several full-sized clay models were discarded because they, frankly looked “too GM-like.” The final Gyron model was loosely based on a sketch Engel made years before in one of his school notebooks. The final Gyron was delta-winged and had two in-line wheels plus outrigger wheels on each side that supposedly came down to stabilize the car when it was stopped or when the onboard gyroscope was turned off. The futuristic interior of the Gyron was designed by Bill Dayton.

Even though the final Gyron was planned with an onboard gyroscope, the Ford Design Center soon figured out it didn’t have the budget for the $50,000 gyroscope, so a small electric motor was installed that would silently propel the Gyron along at about five mph with its outrigger wheels down. A battery was also installed that gave the Gyron lights and electric-powered steering. Engel drove the Gyron up and down the Design Center hallways, and on one occasion put lighted gel in the backend so the Gyron would “smoke” like it was rocket powered. You can also rest assured that Tremulis logged plenty of time behind the steering handles of the Gyron.

A Ford press release dated Mach 11, 1961, introduced the Gyron to the public. In general, people were fascinated with the idea of a two-wheeled, gyroscope-controlled car. That press release also implied the Gyron had all kinds of onboard computers, and it forecast the Gyron would be what all cars would look like in 30 years.

The Gyron was first shown publicly at the New York Auto Show starting April 1, 1961, with a display deigned by Bill Dayton. In May the Gyron was moved to the Ford Rotunda to help celebrate the 25th anniversary of the its reopening. On November 8, 1962, the Gyron and the elaborate City Of The Future display it was part of were lost in a catastrophic fire that destroyed the Rotunda.

Tremulis believed aerodynamics represented the future of car design, and he said so long and loud. His superiors at Ford didn’t see it the same way. After he left Ford in 1963, and for the rest of his life, Tremulis preached aerodynamics in car design. He was like an evangelist, and his projects included gyroscope-controlled high speed vehicles.

Between 1980–82, Ford lost $2 billion, and a lot of people thought it was headed for bankruptcy. It was rescued (if you will) by a new design direction championed by designers Jack Telnack, Fritz Mayhew, Ray Everts and others. That new/old direction was aerodynamics. In 1980, the Taurus/Sable program got underway, and the aerodynamic Taurus and Sable went on sale December 26, 1985. Between 1983-89 Ford made $30 billion, and it was almost all from Taurus and Sable sales. It’s not an overstatement to say that aerodynamics saved Ford.

Tremulis, who died in 1991, lived long enough to see his theories about the benefits of aerodynamic car design vindicated at Ford and elsewhere.