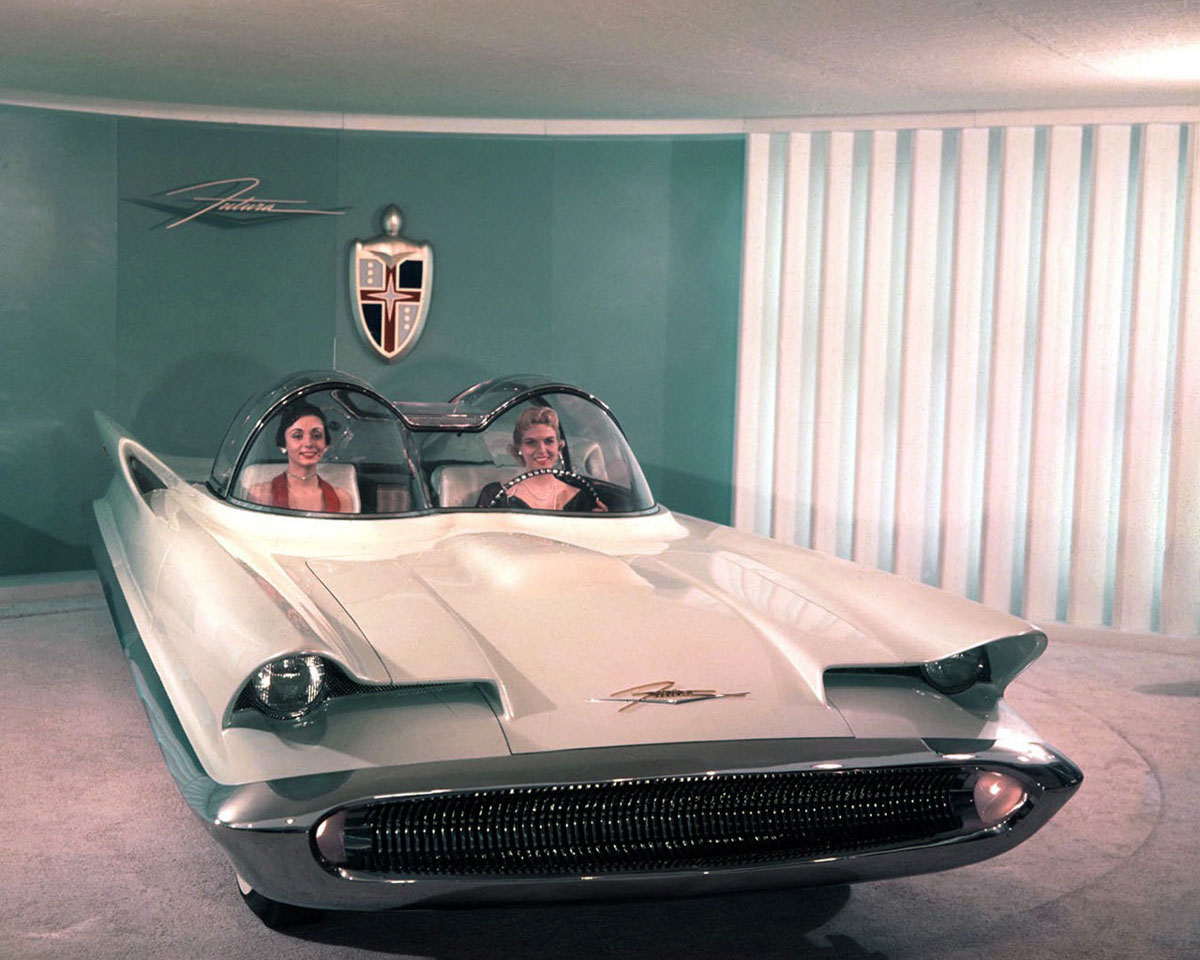 Lincoln Futura (Part I of III)

The Lincoln Futura was conceived in 1952 by Bill Schmidt, who at the time was head of the Lincoln-Mercury design studio. While on a diving vacation in the Bahamas with his friend Bill Mitchell, a GM designer of some fame, they both became fascinated by the underwater sea life they saw. For Schmidt that fascination resulted in the Futura; for Mitchell it was translated into the Corvette XP-755 and eventually the Corvette Stingray.

Although GM’s Motorama pushed Ford to build ever more exotic concept cars, Ford’s original reason for building postwar concept cars was to capture features incorporated on their concept cars (like big round taillights) and to discourage other companies from using those features on their future production cars. Benson Ford, then head of Lincoln-Mercury Division, liked concept cars. Mercury had created the fully-operable XM-Turnpike Cruiser. It was returned from Ghia eleven months after the Futura. The Futura was Lincoln’s attempt to produce a very memorable and popular concept car.

Ford determined that concept cars could be built in Europe much cheaper than in the US. The Stylerama cars were all supposed to be pushmobiles, for which the Italian coachbuilders had given bids of $15,000-$50,000 to build each. Ghia charged $80,000 to build the Mercury XM-Turnpike Cruiser, which was fully operable, and L-M Division paid Ghia $75,000 to build the Futura. As was the XM-Turnpike Cruiser, the Futura was all metal and not fiberglass, and it was fully operable. Although many have claimed that Ghia was paid $250,000 to build the Futura, that’s not true. L-M Division publicity did claim the entire Futura project cost $250,000, but that included all costs including designers’ and clay modelers’ wages, workers comp, retirement, etc.

The Futura concept car was authorized by Benson Ford. Initial estimates from Schmidt were that the entire Futura project would cost about $100,000 plus design and clay modeling time. Schmidt prepared the initial sketches of the Futura; the body development was followed by John Najjar; Martin Regitko did the design engineering; Roy Brown supervised the design work; designer Ken Spencer supervised the clay modeling; Stan Thorwaldsen designed the entire interior; and Ron Perry designed the double-bubble Plexiglas top.

The chassis and running gear (including engine) were from an unused mechanical prototype built by Hess and Eisenhardt for the Mark II project and made from a cobbled ‘53 Lincoln. Continental Division sold the unused mechanical prototype to L-M Division for $17,000. Plans, blueprints, a plaster model, chassis and running gear were all sent to Ghia in Turin, Italy, to be made into a full-sized running vehicle. The complicated Plexiglas top and interlock system was built in the US and shipped to Ghia. Don DeLaRossa, who spoke fluent Italian, supervised the build process in Italy.

The Futura was neat looking, but its air conditioning was awful. The occupants cooked like stuffed pigs with the top closed. (There were no opening windows.) When driven at speed, the Plexiglas top “drummed” from road noise. Otherwise, those inside could hear very little of what was going on outside, so a microphone was installed, but it didn’t work very well. With its great looks and despite all its faults, the Futura really was a laboratory on wheels, and is arguably the most popular concept car ever built.

Schmidt left Ford for Packard in March ‘55. In May ‘55 George Walker was named a Ford vice president and placed in charge of Ford design. Later that same month John Najjar was named by Walker to head the Lincoln design studio. When he got into the main Lincoln studio, the ‘57 Lincoln had already been designed supposedly by Schmidt before he left. However, the story’s much more complicated than that.

After Schmidt left, Walker and Elwood Engel, Walker’s assistant manager, redesigned Schmidt’s production ‘57 Lincoln proposal to make it look as much like the Futura as they could. Najjar was told the ‘57 Lincoln clay had been designed by his friend Bill Schmidt, but Najjar hated it anyway, and insisted on lowering the fins by 6 or 7 inches and making “other changes.” (Schmidt vehemently denied putting the big fins on the production ‘57 Lincoln.)

Only after Najjar retired did the full story of the changes made to Schmidt’s alleged ‘57 Lincoln proposal come to light. No photos of the ‘57 Lincoln before Najjar lowered the fins can now be located nor can any photos or sketches of Schmidt’s initial proposals for the production ‘57 Lincoln. What the existing Design Center photos do show is the ‘57 Lincoln clay immediately after the fins were lowered, but it still had all the remaining Futura design cues, which were mostly removed by Najjar before production. Except for the changes made by Najjar, the ’57 Lincoln was supposed to be a productionized version of the Futura.

Next time, part II will tell how the Futura became the infamous Batmobile. Part III is an interview with George Barris, now deceased, the man who turned the Futura into the Batmobile.

Development of the Futura and 1957 Lincoln