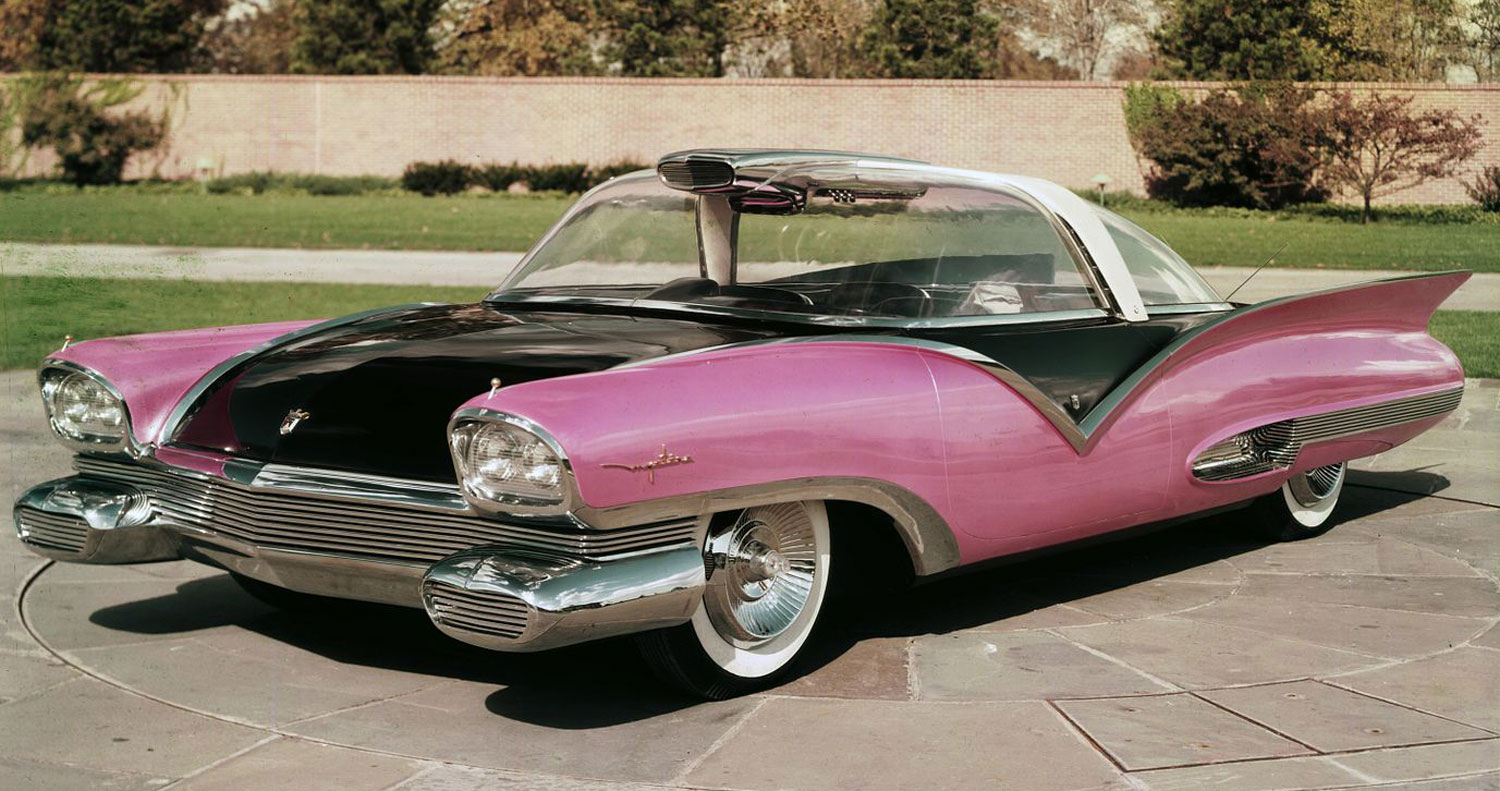 The Mystere was a concept car originally intended as the Ford stablemate to the Lincoln Futura during the 1955 show season. The ’55 show season began with the 47th annual Chicago Auto Show, which started on January 8, 1955. The Futura was there. The Mystere, however, was not—nor was it at any auto show that season. Here’s what happened.

In July 1954, after designer Bill Boyer finished design work on the ’55 Thunderbird, he was asked by Ford design studio head Frank Hershey to design a new Ford concept car for the 1955 show circuit. Hershey was knee deep designing the ’57 production Ford with other studio designers, so the only direction he gave Boyer was that the new concept car’s design had to emphasize the distinctive finned swoosh that was planned for the sides of the ’57 Ford. Boyer made one sketch and showed it to his studio manager, Damon Woods, who loved it. Woods grew up in France and suggested they call the new concept car the Mystere after the French Mystere jet fighter plane. Package measurements were determined by Hershey, Bob Maguire (exec) and Woods. Studio designers were then given two days to adapt Boyer’s design to a full-sized blackboard rendering, which they had to redo when Hershey increased the wheelbase of the Mystere to 121” to make it look longer and more integrated.

There was no engineering done on the Mystere. A 3/8-scale exterior clay model was made together with a full-sized interior buck. Designers who worked on the design of the Mystere were Woods, Boyer, Bill Braathan, Ralph Ortiz, Pierre Crease, John Van Tilberg, John Vanchovie, Ed Jaquet (student/intern), Jim Quinlan and Gale Halderman. The front end was changed from Boyer’s original design when it was determined the original front end design wouldn’t work.

Because Ford’s Design Department shops were not yet completely staffed after the move to the new building the year before, the Mystere’s fiberglass body was built by Creative Industries who also made the Plexiglas top and the car’s chassis from steel I-beams. The Mystere had no engine or running gear.

The Mystere was finished in December 1954. It was built to look as much like a jet fight as was feasible given the fact it was supposed to be powered by a gas-turbine rear engine (not installed). Other supposed features on the Mystere included an airplane-like interior with a U-shaped steering wheel with buttons and triggers controlling many of the car’s functions; a steering wheel that could be flipped from left to right side; keyless entry; buttons for the ignition switch; and floating instrument gauges.

Meanwhile, at the same time the Mystere was being designed and then built at Creative Industries, Hershey, Maguire, Woods and other studio designers were busy finishing up their design for the production ‘57 Ford. After he looked at their proposal, Henry Ford II asked Ford’s design consultant George Walker to evaluate what Hershey and crew planned for the 1957 Ford. Walker said he could do better. HFII said “OK, do it.” So Walker recruited Joe Oros, one of his employees assigned to the Ford studio, and Gale Halderman, a recently-hired Ford designer, to help redesign the ’57 Ford. Walker, Oros and Halderman accentuated the Mystere’s exterior features even more on their ’57 Ford proposal. The end result is that there were now two ’57 Fords—the original one designed by Hershey and crew and the car designed by Walker, Oros and Halderman. HFII’s solution was to market both cars. The Walker car became the ’57 Ford Fairlane and Fairlane 500 (118” wheelbase), and the Hershey proposal became the Custom and Custom 300 series (116” wheelbase) ‘57 Ford.

In May 1955, a year and a half before the production ’57 Ford was introduced, Walker was appointed head of the Ford Design Department, which he promptly renamed the Styling Center. Walker’s appointment was due at least in part to his redesign of the not yet introduced ’57 Ford. Frank Hershey promptly quit rather than work under Walker. Walker then named Maguire to replace Hershey as head of the Ford studio. Halderman was made a manager. A year later, Walker named Maguire to replace Alex Tremulis as head of the Advanced studio. Oros was then appointed head of the Ford studio.

What happened to the Mystere? Although the public was never told why one of Ford’s most fantastic concept cars was introduced after the auto shows were mostly done for the year, promptly at 11:30 am, on Wednesday, October 5, 1955, Walker, proud as a peacock, introduced the fuchsia-pink and black Ford Mystere (with a pearlescent-white band over the top) at the Ford Rotunda. And two years later, at the end of the ’57 model year, Ford had outsold Chevrolet, cementing Walker’s job as head of the Styling Center and making HFII one extremely happy guy.