You’re Quite a Fooler!

New studio stories that aren’t in the Dean’s Garage book.

Michigan in the winter is cold. Sometimes it’s really cold. The damp wind laughs at coats.

One particular winter it seemed like we were constantly having outdoor shows in the patio during the coldest weather. I called the place “Design Station Zebra.”

When a clay model was dragged out and set up on the patio, studio designers, sculptors, and engineers huddled together waiting for the arrival of the upper echelons to make their grand entrance. We had to be ready to jump through hoops in response to arm-waved directions coming from the decision makers; in this case, Irv Rybicki and Jack Humbert.

So the scene was this. After the model was set up in the frozen tundra, we stood around shifting our weight back and forth in an effort to keep from freezing while we waited for the review to begin. An Electra 225 or an Olds 98 sedan eventually drove through the stainless-steel gates that led from the parking lot into the patio. Then the impossibly clean luxury sedan (straight from the heated executive garage), made slow circuits, keeping about 50-feet away from the model. The sedan stopped occasionally. When a rear window went down a few inches, the chief or assistant chief designer scurried over to the car for some instruction about a change to the model. Often the change involved moving a tape line or something, adding a grille bar, or changing a taillight. Positioning a thin tape line on a model with frozen fingers as it fluttered in the icy wind was sometimes impossible because the adhesive on the tape became frozen. Pins would have to be used to secure the tape. Then the window would go back up, and the review continued.

Chuck Jordan wouldn’t ride around in a car even during the coldest reviews. He made his grand entrance bare-headed wearing a full-length, black leather coat open at the neck. Most impressive. I don’t know how he strayed warm. I, however, could not stay warm. I was perpetually cold, and decided that surviving extended excursions on the frigid flight deck was more important than keeping up appearances. I bought a green Army-surplus arctic parka, complete with a fur-edged snorkel hood, at Joe’s Army-Navy in Pontiac, Michigan,

I took it to work and wore it during the next outdoor show.

The show unfolded like this. Chuck and studio supervisors were on the west side of the patio, and the clay model was on the east side.

I had made an Expand-O mock-up that would lengthen the rear overhang a few inches when viewed from across the patio. On their signal, I went over to the car and re-configured the position of the mock-up to show the longer length, then retreated back to my previous location. There I stood, waiting, with the hood in full extension, trying to stay warm.

When the review was over, Chuck, on his way back to the building, walked right up to me, grabbed the edges of the hood from the front, and making reference to the mock-up, said, “You’re quite a fooler!” Wow! A compliment from Chuck!

I used to say, “What this place lacks in heat it makes up in wind.” In 1988 I escaped Michigan and moved to Arizona to get warm.

A summer anecdote about Steve Pasteiner.

“Steve and I were talking in the studio on a sweltering hot summer day. Even the temperature inside the building was beginning to get uncomfortable. He remarked that ‘even though it was 92-degrees outside, it wasn’t all that bad, because with the wind chill factor it only felt like 89-degrees.‘” Chuck Jordan had a GMC Motorhome modified so he and other season ticket holders could review models in heated or air conditioned comfort, sheltered from freezing weather or sweltering humidity. Ah, the privileges of rank.

Tom Peloquin on the Chuckwagon

I’m not sure when this GMC motor home was converted into a mobile viewing theater for the Design Center patio, but it was humorously dubbed the “ChuckWagon” shortly after it entered into service (in honor of Chuck Jordan, of course). The execution was first-rate. This can be seen in the curvature of the picture window (to match the cross-section of the body), and in the leather-trimmed theater seats. It provided a comfortable climate-controlled environment for those who were fortunate enough to remain inside during the show. The rest of us were sent out into the bitter cold or sweltering heat to make adjustments to the clay models. The patio was referred to as “Design Station Zebra” in the winter time (referencing the movie Ice Station Zebra). In summer we would say that the weather had “matching numbers” (90 degrees with 90% humidity). Overall, though, I’d have to say I have fond memories of the ChuckWagon.

Photos courtesy of General Motors. For editorial use only. Any commercial or other non-editorial use of the material will require the express written approval of the GM Media Archive. 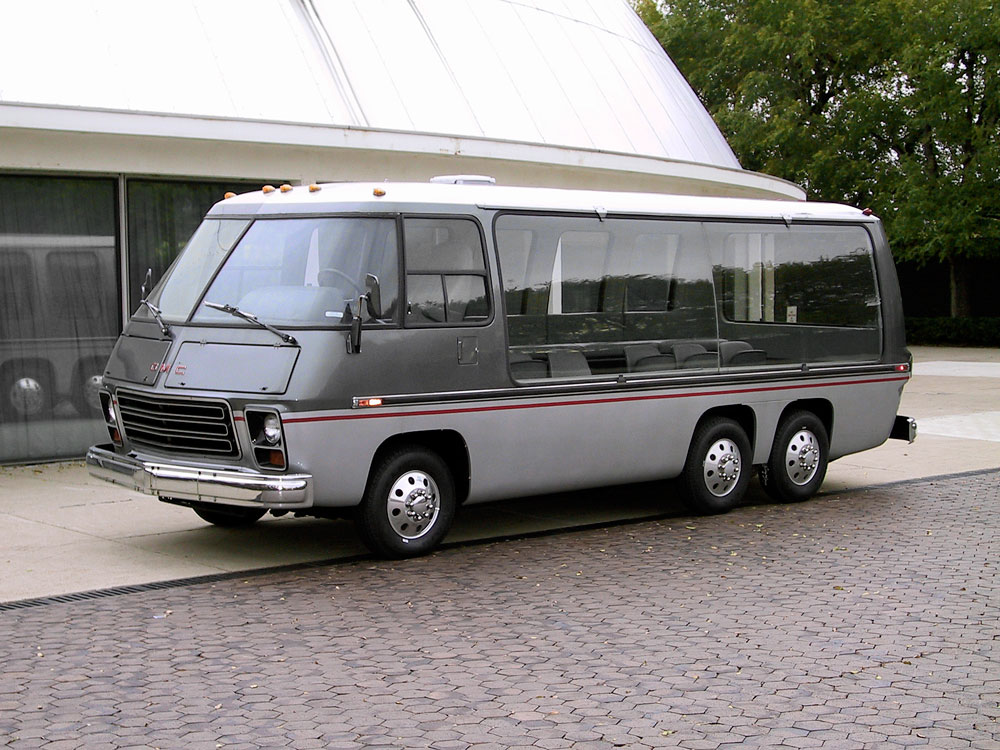 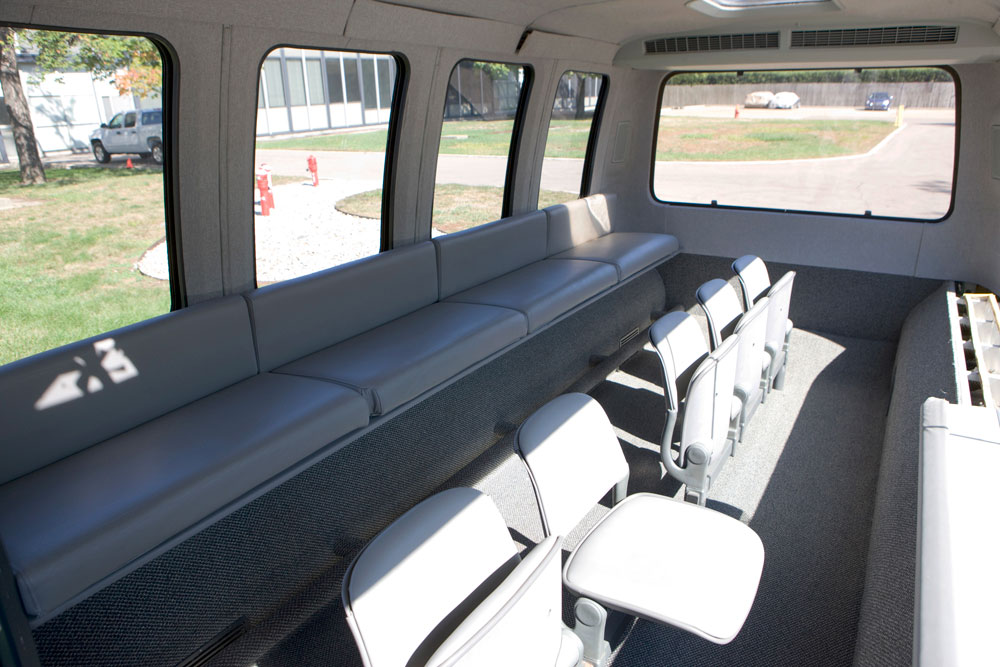 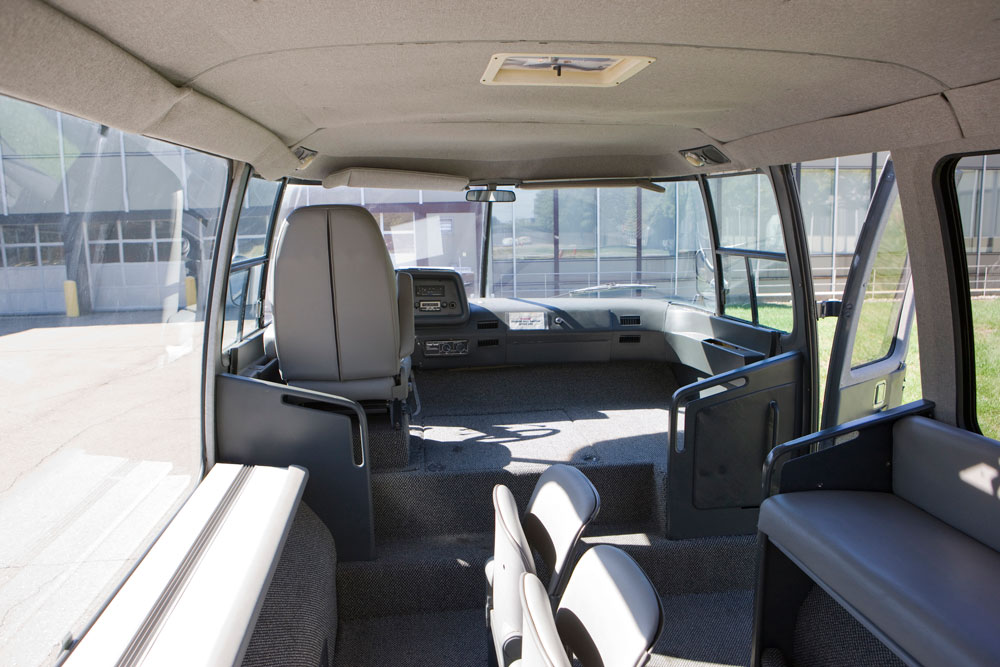 There are lots of stories like these in the recently released book, Dean’s Garage: The Future is Back.

Do you have a great studio story you’d like to tell? Send it to me!