Dean’s Garage honored by the Society of Automotive Historians

The Dean’s Garage Book was recently reviewed by Helen Hutchings and appeared in the September/October 2020 issue of the Society of Automotive Historians Journal.

Dean’s Garage has received special permission to post this entire issue of the Society of Automotive Historians’ newest issue of its Journal so you can see and read on page 12 the great commentary it published about the Dean’s Garage book. When sending permission the editor, Rubén Verdés, added, “If you enjoy this entire issue, please consider joining SAH. Members receive six issues per year of the Journal as well as the annual larger publication titled Automotive History Review. Membership is open to all who have any interest in automotive history. SAH has been designated an educational 501(c)3 organization.”

Those who prefer a digital-only membership, the annual cost is $20. Those wishing printed publications, the annual cost is $50 to US, Canadian or Mexican addresses, and $60 to all other country’s addresses. Print memberships include full digital access as well. A real added plus is most back issues of both Journal and Automotive History Review published over the past half-century have been digitized and are accessible to members-only. Thus as a member you can read the prior installments of the article on page 8 titled Art, Architecture and the Automobile. To join visit www.autohistory.org

We also received another surprise in the form of an e-message from an SAH past-president, Louis Fourie. He organized and maintains an incredibly comprehensive Resource listing for SAH. After reading the commentary in this issue of the Journal, he did visit the DeansGarage site.

Here’s the message he sent: “You have a most impressive website which I have added to the Resource page of the Society of Automotive Historians under the heading Enthusiast Sites. Here is a link: https://autohistory.org/links-to-online-automotive-history-resources where you will even find a link to Dick Ruzzin and his Bitter CD. Kind Regards, Louis Fourie. 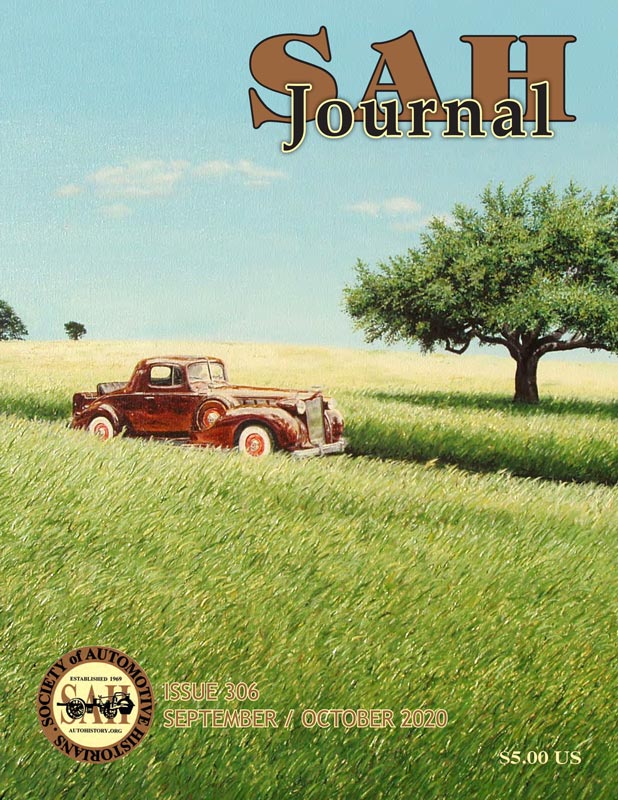 To view the entire 9/10 2020 issue of the Society of Automotive Historians, click on the cover image.

A goodly number of SAH members indicate automotive design as an area of interest. For them, this book should be a “must have.” To all others I’d say put it high on the list to add to your library for the enjoyment and edifi cation it offers—not to mention the more than 300 delicious images that are a satisfying mix of photos, original art, design sketches and models.

The proprietor and author of Dean’s Garage is Gary Dean Smith. He was part of GM’s design staff for 15 years, 1973 to 1988. While still with GM he started an outside personal business he called Performance Design which he grew after leaving GM and Michigan. Though he goes by his birth name Gary, he chose to name his book—and website which I’ll get to next—using his middle name which he shared with his father O. Dean Smith just as father and son shared enthusiasm for all things automotive.

That website is deansgarage.com. Since establishing it in 2009—well, to say it has grown and that it’s contributed to by all manner of notable designers and others is an understatement.

So now we come to the book Dean’s Garage: The Future Is Back.

Any auto-centric designer’s dream job was (and is) to be accepted by and work for a major maker. However, once hired there often came what might be termed a “reality check” for even dream jobs aren’t always “dreamy.” Sometimes some of those “cre-atives” who advanced to become studio or department heads weren’t always “dreamy” to work for; or the project was on such a “crunch schedule” that dream job sometimes felt more like sleepless drudgery. Still, cumulatively they weren’t described as creatives without reason as the pages of this book, created from stories about and told by some of those GM insiders, prove. Stress-reducing and attitude-leveling stories abound along with other memories, all well illustrated as the book’s image count testifies.

Two other pluses are important to note. The book is well indexed and photo captions identify people by name, which is especially important since the group shots document a particular studio’s personnel at a specific date, recording them for posterity and exemplifies why the book is such an important reference while also being entertaining—as “the creative contributors” certainly demonstrate!

There are quotes, such as this wonderful malapropos exchange: “I didn’t like that car when it fi rst came out, but since then I’ve done a complete 360,” said Dave Holls, to which Bernie Smith replied, “Ahhh, I haven’t gone as far as you Dave; I think I’ve done about a 270 on that one.” Further, there’s some always-good-for-a-grin Stan Mott drawings sometimes accompanied by his words, other times with those of designer-columnist Robert Cumberford.