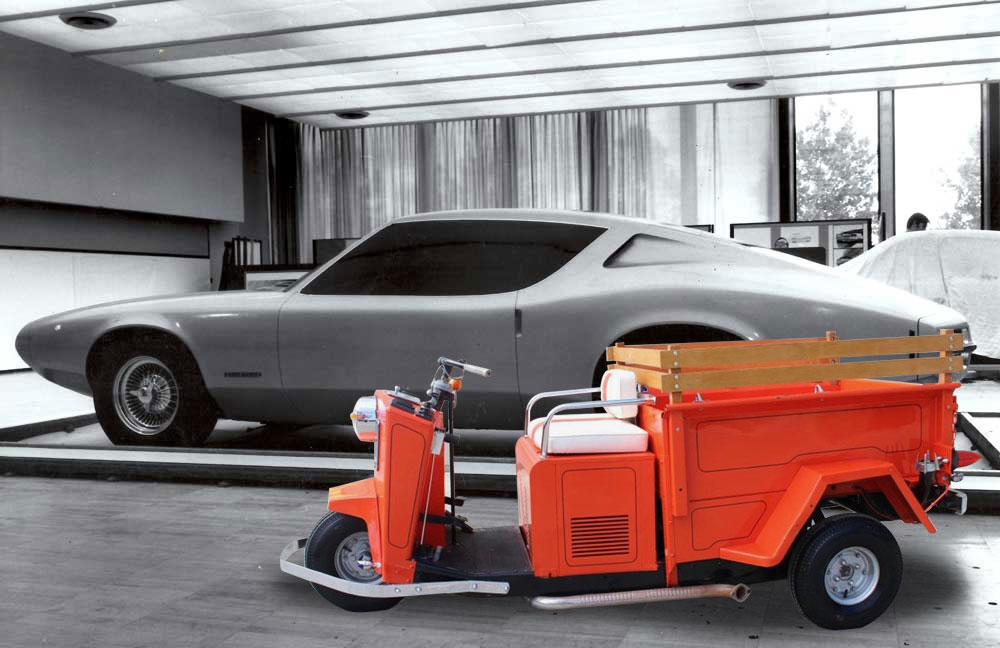 In about the 1970-71 time frame in Advanced Two Design Studio, Jerry Hirshberg noticed that an electric 3-wheeled Cushman cart was parked in the alcove entry in the hall outside our studio. It was plugged into a wall outlet being recharged. He had recognized it as being the one that the shops had prepared specifically for Bill Mitchell. Bill was in a foot cast from a previous accident he had. He needed a way to get around to the different studios without walking. The Cushman was painted silver with chrome “MOON” type full wheel hubcaps on the rear wheels and new upholstery on the seat.

One day on lunch hour Jerry had opened one of the large entry doors to the studio and pushed the cart in while saying, “Let’s see what this thing will do.” Jerry knew that Bill was not going to be in the building that week so there was no worry that it would be needed by him to use then.

Our studio was not working any full size model at that time and the small scale modeling tables were placed between the rails so there was a lot of space around the outer part of the floor area. Jerry turned the cart on and then took a few laps around the studio. He asked someone to time one of his best lap times with a wristwatch and with that he challenged anyone in the studio to better that time. A few of us that were there took our best try and as it turned out Graham Bell had the best time. We then pushed the cart back out into the hall and plugged it back into the wall outlet to be recharged.

The next day when we came into the studio in the morning there was a large note taped to the door. It was worded with a rather nasty tone and warned that if whatever we had done to mark up the floor ever happened again there would be a grievance filed against our studio by the union. The night sanitation crew had to bring in the large electric rotary buffing machine with steel wool pads to clean the rubber skid marks off the floor. They were left by the front tire as it made the tight corner turns. They were not too happy with the extra work needed to clean the studio floor that night.