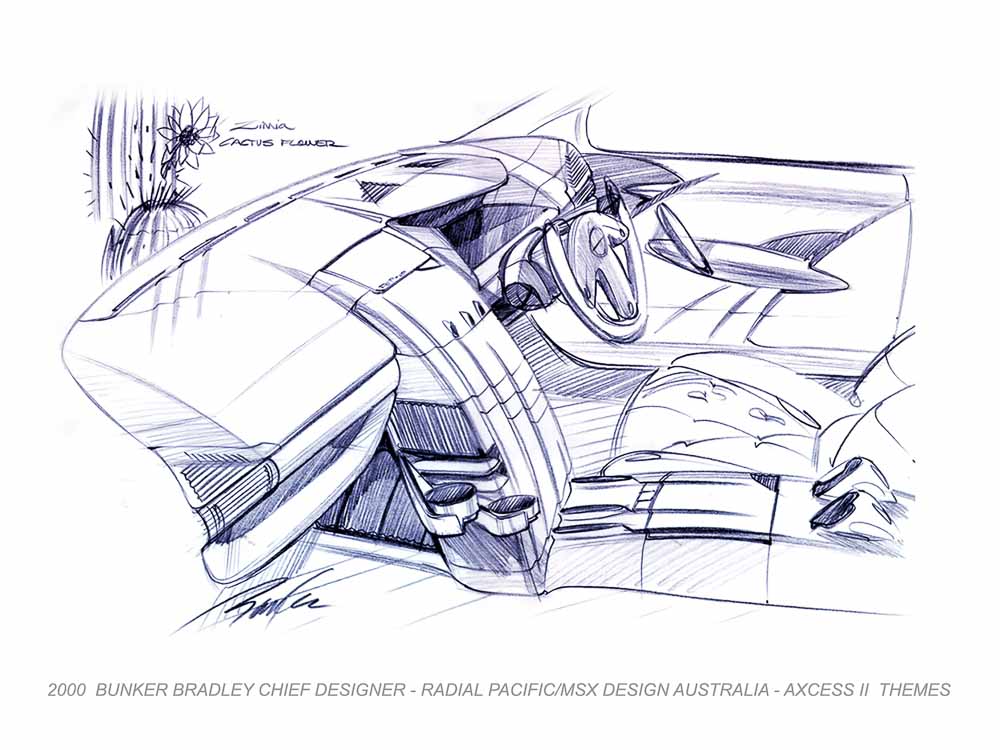 by Bunker Bradley, 4/26/2018. Published by Permission. A Dean’s Garage Exclusive.

It is 1986. I have just received confirmation that my next design job is Australia: GM Holden Motor Company or GMH, Port Melbourne, Australia. I actually had another job offer from Audi in Germany where my friend Dave Robb was working, but had turned it down in favor of an English speaking country, where the travel guide says “it has more beer, more top-less beaches, and more well-endowed women than any other country in the world!” I am going there—far far west and not stopping until I get to Australia “The land down under—The land of wonder” as the song says. It will be a fresh start, a clean slate, and a new challenge in an entirely different country for me.

All the lessons learned—the challenges and experiences will be my ammunition in starting anew. At GM (1979–1983) I worked with the most creative designers around. I received wind tunnel experience on the 1980 GM electric car program (Advanced III, Ron Hill), and worked on advanced and production vehicles in Buick I and Buick II. I learned the finer points of clay modeling in Buick II from Joe Amitangelo, Mark Kid, and others. Designers were not encouraged to clay model at GM, but I modeled anyway! When I left GM the modelers all donated tools to make up a clay modeling tool kit for me to take on my journeys. I have used my tools with the different names etched on them for clay modeling (each tool has a different name on it—none with my name) all my life.
Speaking of modeling stories. This reminds me of good old Joe Amitangelo whom I worked with in Buick II along with designers, Carol Pirelli and Steve Pastiner. “Bunker,” Joe said one day, “to be a great designer you must be like an Italian with an Italian name. So I will call you Bunkerelli!” And from then on I was Bunkerelli in the studio and Joe would say every day, ”Bunkerelli, draw lines (on the clay model for him to follow).” Thanks, Joe.

At Ford CCC (1984–1986) someone in the new studio asked if I had stolen or pinched someone else’s tools because of the different names. I had to tell him this story to explain it—it never crossed my mind that my tools were stolen! From the Ford experience, I learned to never take anything for granted and be self sufficient at all times. As General Manager, I lead the team, designed model armatures, created designs, did human factor layouts, clay modeling, and fiberglass layups along with the other nine members of the studio team.

At Honda HRA (1983–1984) we learned the “Honda Way” and Japanese practices like: JIT, Kaizan, DFM (design for manufacturing), and the Deming’s principles of total quality management in design and manufacturing. The Japanese approach to design was definitely different to Detroit’s methods. My traveling partner and fellow designer, Truman Pollard (Honda Lead Designer, and later Chief Designer of Mazda) and I made many trips to Saitama, Japan (Honda headquarters) to complete the modeling of the new 1986 Accord three-door coupe (the first Accord Coupe). We were instructed on how to speak and think Japanese the “Honda Way.” It was a bit like George Orwell’s1984 meets the movie “Lost in Translation” but in real life—and in the year 1984! However, we made a lot of good friends there and in L.A., like Kenji Abe (our Japanese counterpart in L.A.). In fact, there was a bit of a nationalistic rivalry going on which added to our mutual respect after some healthy competition.

Not too long after I started at Honda, a bit of rivalry started up between the Japanese designer-modelers and U.S. designers caused by myself, I am afraid to say. It all started with some innocent fun at the local tavern one night at Happy Hour.

One side note: At Honda, a designer-modeler is primarily a clay modeler but can design too. All designers and modelers know each other’s skills, but have a specialty. Essentially, everyone models and everyone is a creative designer. In Japan we all modeled on the full-size green clay cars.

In the studio, the Japanese were complaining about how expensive it was to live in California. I told them they could eat for free almost every night by going to Happy Hour. You know—you can go to a bar or tavern and eat finger foods if you order a drink. I knew of a tavern that had fried chicken and all the fixing’s for free. As usual, we were all working till 9 p.m. that night, so I offered to show them how it’s done. When we arrived at the bar, they did not know what drinks to order, so I suggested “Ice Teas” and everyone agreed. We had teas and fried chicken and all the fixing’s. No problem—except as a joke I ordered all of us “Long Island Ice Teas” which has four different kinds of alcohol in it—my usual drink at the time. I wanted to see if they would notice anything different. To my surprise, they did not say anything and drank them without notice. So I thought everything was fine. I was driving anyway!

Well, our woozy modelers returned that night to work on the clay model. Within 15 minutes they both had fallen asleep (passed-out)—one on the floor at the front bumper, and one on the back bumper of the car, right in the middle of the modeling studio, in front of our desks. About the time we noticed all this our Japanese Design Director showed up to inspect the model and spotted them sleeping on the job! Oh man, this was very bad; a real “loss of face” for our Japanese modelers and I had caused it all. They did not know what a “Long Island Ice Tea” was until now. They got a rude awaking and a verbal scolding by the boss in Japanese. Well, when the boss left, they both called me a “Baca Gygen,” meaning “stupid foreigner” in Japanese. It was pretty funny—thinking back on it now, but I was now in their gun sites for payback.

Our very first trip to Japan became a contest to see who could get who drunk the fastest. Truman was dragged into this one with me. After hours at Honda, we had arm wrestling contests, we had eating strange things contests, we played pool, we hit baseballs, and compared notes on “What did your Dad do in the war—WW II? All in all, Truman and I held up our end for America-Honda America. We all became good friends in the end and made many trips to Honda Japan. We even had the privilege of being invited into their homes to meet their families, which is an honor rarely offered.

My experiences at GM, Ford and Honda would serve me well in Australia, where I spent 14+ years designing cars, trucks, motorcycles and graphics (1986–1989) and (1994–2003) throughout the Austral-Asia area.

I will have to say, the Australian lifestyle and their love of cars, especially V-8s, is unbeatable!

1986—Off to Australia—the land down under!

Next: “Chasing the Future” Part 3 “The Australian Experience” by Bunker Hill Bradley