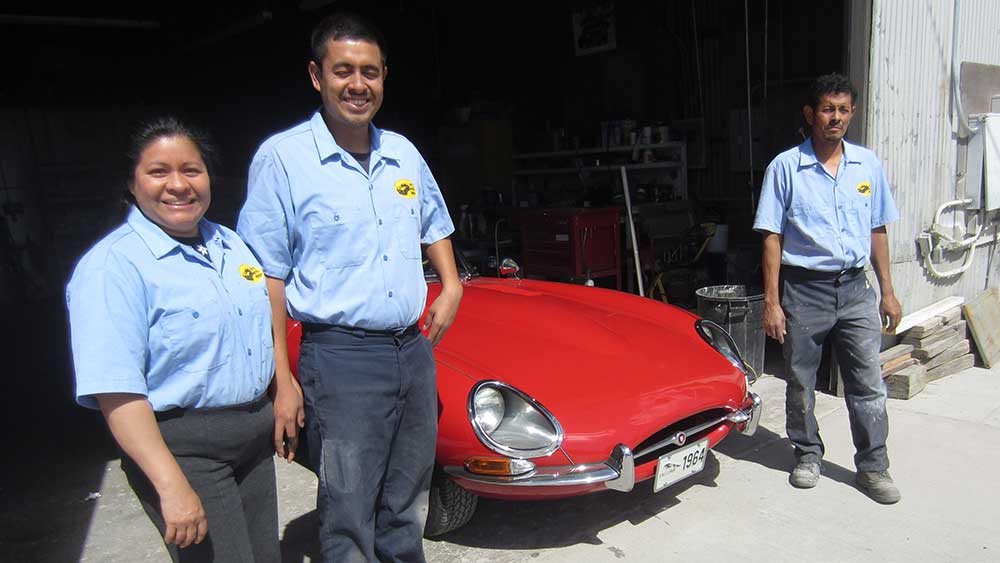 I met the Lopezes through my 1964 E-Type. That’s Raquel on the left, then son Kevin and Manuel. Raquel told me spontaneously that Manuel is a very kind person.

Michael Lamm is no stranger to Dean’s Garage readers. His story about Manuel Lopez reminded me of Joni Mitchell’s For Free. Manuel doesn’t work for free, but he has a passion for excellence. He probably doesn’t care if he ever gets written about in Rodder’s Journal.

Manuel came from humble origins, and worked hard for decades, learning and perfecting his skills. He probably sees every opportunity as a gift instead of an obligation. He doesn’t expect the world to be given to him on a silver platter. Anymore, humility and passion seem like increasingly rare qualities.

You’ve probably run across a talented craftsman or two working in a obscure shop creating for the love of it, not for the notoriety. Comment about your experience.—Gary

Once or twice in a lifetime, you run into someone or something that’s a lot better than you’d expected. In my case, that happy accident turned out to be Manuel Lopez, a man who paints cars for a living and whose extremely high standard defies expectations and whose humility, when it comes to pricing, brought me to this point of writing about him. I simply want the world to know that men like Manuel Lopez still exist, and I consider myself lucky to have run into him.

Actually I shouldn’t say just Manuel, because he works with his family at their shop in Modesto, California. His wife, Raquel, comes in every day and helps. His son, Kevin, likewise, although Kevin is now studying electrical engineering at the local junior college and can devote only a couple of days a week to the processes of sanding, masking and generally helping his dad perform his seemingly effortless magic.

I had occasion to meet Manuel through a friend, Ron Tinkey, who discovered him when he needed his 1938 Cadillac V-16 towncar painted. More about that in a moment.   Manuel was born and grew up in Veracruz, Mexico. He started helping out in his father’s bodyshop when he was six years old—fetching sandpaper, filling pails of water, sweeping and watching his father work. Over the next 11 years, Manuel’s dad gradually gave him more responsibility and taught him the rudiments of auto bodywork and painting. By age 17, he began to actually earn some money working in another shop in Veracruz.

Meanwhile he fell in love with Raquel and, two years later, the couple was granted agricultural work visas and came to California. Both were 19 years old, and neither spoke English. They settled in the rather toney town of Brentwood, some 60 miles northeast of San Francisco, where Manuel found work, first picking apricots and then in a bodyshop.

Within a week, the shop owner, a man named Abel, told Manuel that his work was too sloppy, too “Mexican,” and Abel was on the verge of firing him when Manuel convinced him he could learn. And learn he did—at least to Abel’s satisfaction.

Manuel soon moved on to other shops that paid more, first to a Chevrolet dealership in Dublin, California, then to a larger facility in San Jose. He viewed each new job as an opportunity to learn, to become more proficient at color matching, metal prep, filling, spraying and the like. But he still felt he wasn’t working to what he viewed as his potential.

Meanwhile, both Manuel and Raquel learned English, and in 1994 both became U.S. citizens. Their children, Kevin and Michelle, were born here. Michelle, now 20, works for the Bank of America.

In 2001, Manuel landed a job at a shop called The Works, in Santa Clara, California. The shop was (and is) owned by Chris Debruine, and Chris became Manuel’s fine-arts teacher and mentor. The Works is known for excellence and caters to owners and vendors of high-end cars: Ferraris, Mercedes, Lamborghinis, concours classics; the finest. When I asked Chris about Manuel, he told me, “He was really conscientious, a hard worker, wanted to do the job right, willing to learn—one of the best employees I’ve ever had.”

One of the cars Manuel worked on at The Works was a 1967 Ferrari 275 GTB/4, a virtual twin of the one Steve McQueen had owned. McQueen’s car sold at Monterey in 2014 for $10.1 million. The one Manuel painted, minus the provenance, sold at the same auction for $3.75 million.

Manuel worked for Chris Debruine for 15 years. He learned from the master and, in early 2016, decided he was ready to strike out on his own. He opened a small shop in Modesto and waited for customers. One of the first was Leroy Gatto, a collector from Lodi, who was restoring a 1933 Rolls-Royce commercial van, a vehicle used by J&B Scotch Whiskey in England. Leroy ultimately restored the van to 100-point perfection, thanks in part to the extremely high quality of Manuel Lopez’s work.

Soon afterward, Manuel did the bodywork and paint on Ron Tinkey’s 1938 Cadillac V-16 towncar. Manuel straightened the towncar’s slightly bent decklid and painted the car factory dark blue—almost black; did a beautiful job. Ron came to Manuel on Leroy’s recommendation, and he told me, “If Manuel can pass with Leroy, a devout perfectionist, he’s very, very good indeed.”

When you drive up to Manuel’s shop in Modesto, you’ll be amazingly unamazed. But what rolls out the door will totally bowl you over. Manuel does outstanding work, and his prices are unfashionably reasonable. He usually works on one car at a time, and there’s a waiting list to get in.

Manuel touched up the paint on my E-Type, did a much better job than I’d expected, especially for the price he’d quoted, and that’s when I decided to write about him. No, he’s not paying me; I’m not his PR man, and he doesn’t really need the publicity. But I thought the world ought to know, because we in the old-car hobby don’t luck into craftsmen like Manuel Lopez very often, and we definitely need more like him. 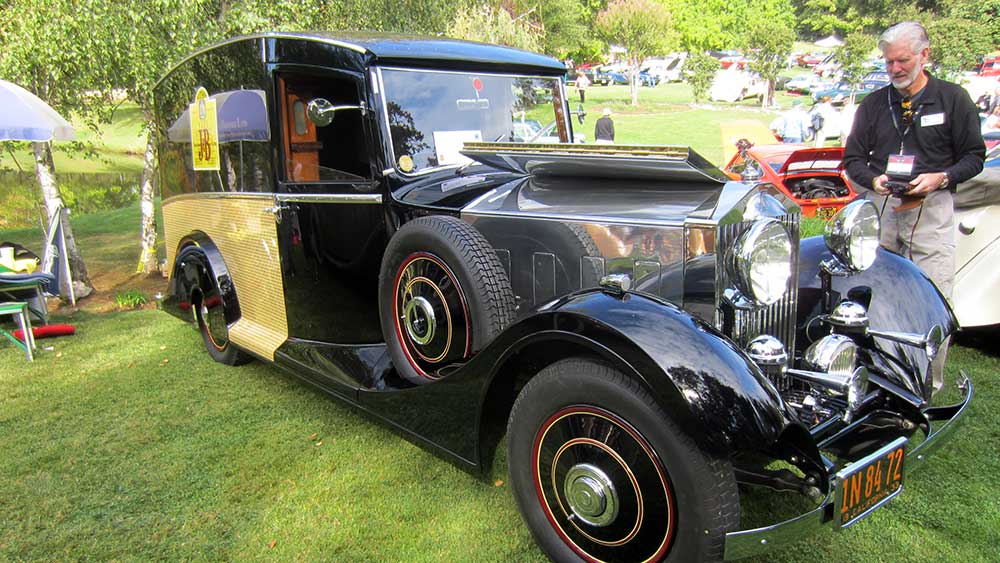 Manuel was recommended to Leroy Gatto by a former colleague at The Works. This is Leroy’s 100-point 1933 Rolls-Royce commercial van that was once used by J&B Scotch Whiskey in London. 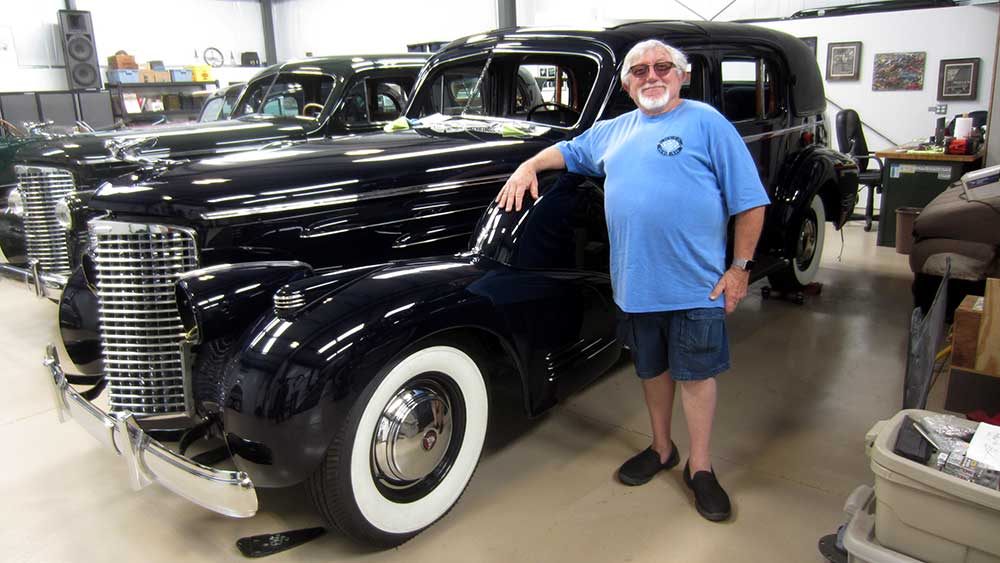 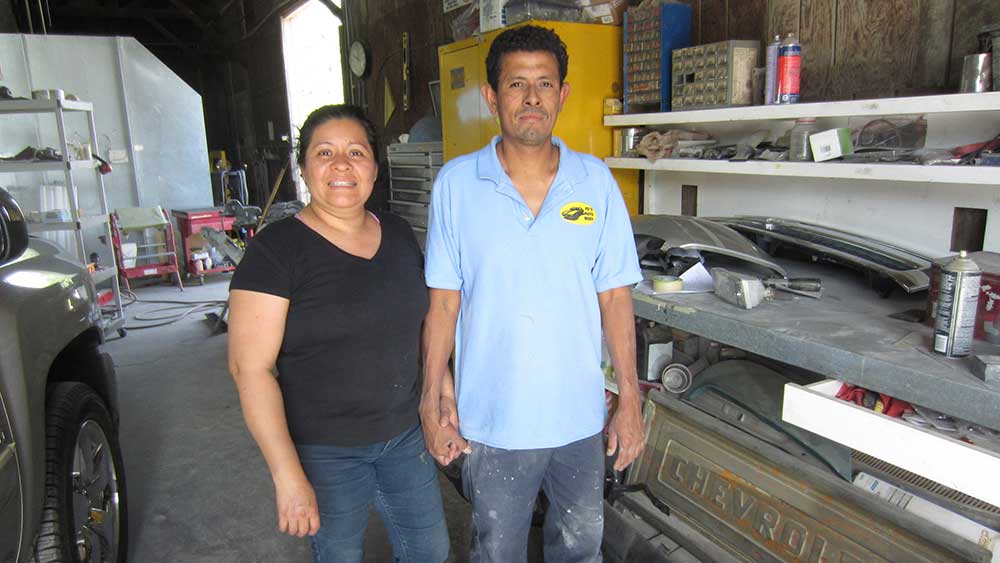 Raquel and Manuel work together in their unimposing shop in Modesto. It’s what comes out the door—the artistry and craftsmanship—that’s impressive. 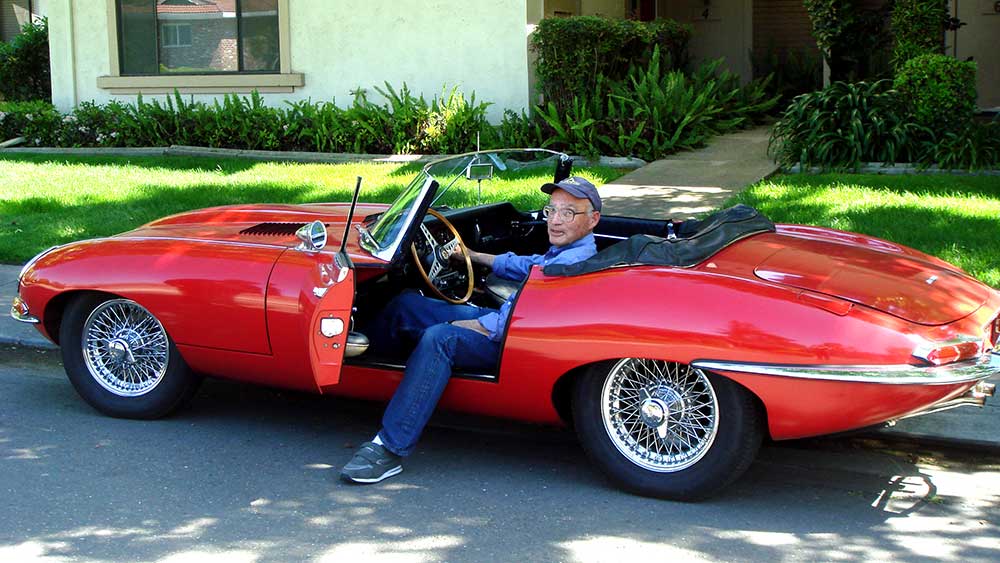