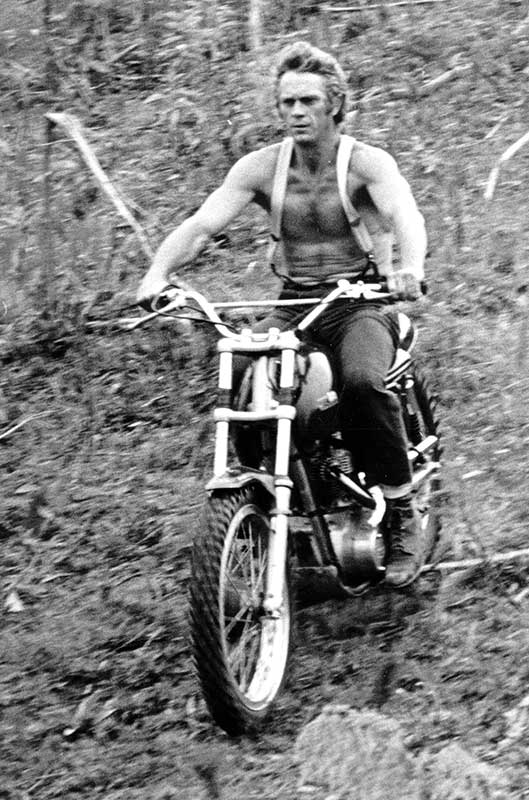 McQueen’s Motorcycles—Racing and Riding with the King of Cool.

The usual suspects would meet up in exotic Michigan locations like Mount Grampian, Westbranch, Ambrose Lake, and others. Clark Lincoln, Larry Brinker, Tom Semple, Bernie Smith, Kim Boose, and Karl Kendall are names that come to mind. I had a Kawasaki KX125 and later a 250 Bultaco. Karl Kendall had a Maico 400 (which he may still have). Larry started out with a Sachs but when we rode together he had a 250 Bultaco (which I know he still has). I think Clark Lincoln had a Husqvarna, and Tom Semple had a Bultaco. Tom Semple and I nearly killed each other out at Mt. Grampian (Read the story on Dean’s Garage).

The bikes we rode were purpose-built dirt bikes, lightweight (with the possible exception of Karl Kendall’s Mako), 1970’s technology. The bikes Steve McQueen rode in the ’60s were modified street bikes, scramblers, desert sleds. Wrestling a Triumph Bonneville through the dirt must have been exhausting. And rough. Not much suspension travel. Steve and Bud Ekins built several desert sleds from early ’60s Triumph Bonnevilles. They’d strip non-essentials, raise the pipes, bob fenders, remove mufflers. Still, though, they probably weighed 400-plus pounds.

Steve McQueen was a biker that made his living acting. His image wasn’t fabricated in some studio meeting. He was authentic.

Steve was serious about motorcycles. He competed in the grueling International Six Days Trial (ISDT) in 1964. In 1970 he co-drove a Porsche 908 at Sebring with Peter Revson and finished a remarkable second behind Mario Andretti. Remarkable because the eam had to outfit him with a “cast-boot” so he could drive the car with a broken foot. He went down before the race on a motorcycle.

Steve did his own stunts if he was allowed to. Some were considered too dangerous to risk injury. In the case of The Great Escape (1963), Steve did his own riding except for the fence jump. Not that he didn’t want to. He conceded that part of the film to Bud Ekins. The German motorcycles in the film were thinly disguised 650 Triumphs.

An excerpt by Bud Ekins on Steve about the filming of The Great Escape: “I really didn’t do much of it (riding). Anything where he could get hurt, that’s what I did. But all the other stuff, when you see him riding by, he did all that himself, and was enjoying it very much. There’s a chase sequence in there where the German stunt riders were after him, and he was so much a better rider than they were that he just ran away from them. And you weren’t going to slow him down. Se they put a German uniform on him and he chased himself! I rode as a German soldier too, but he chased himself several times in the movie.”

“Steve started gathering motorcycles in the ’60s. McQueen’s tastes were eclectic, and he seemed to purposefully step away from what everyone else was doing, preferring less obvious brands and choices. He was loyal to Indians and Triumphs (his friend Bud Ekins was a Triumph dealer). Then he discovered the power, durability, and light weight of the Swedish Husqvarnas.”

Steve on Huskys: “A Husqvarna 405 at about 12,000 rpm—that’s music. In bike racing, I specialize; I do rough country riding, the long distance kind of thing. With a cycle, you’re dealing with natural terrain, you learn to read the earth. I like being out there in the desert on a set of wheels. You’re really alive out there.”

The book speaks volumes about Steve’s character, his interests, his commitment, his humanity. There is a remarkable story about Steve saving AMA racer Mert Lawill’s career by insisting Mert see Steve’s doctor after a crash that severely injured his hand. Mert never received a bill.

The filming of On Any Sunday by filmaker Bruce Brown takes a chapter. Mert Lawill and Malcom Smith are featured in the film. And Steve as the reluctant collector talks about his hobby interests and collection.

McQueen’s Motorcycles is a very good book. Look for other posts about Steve McQueen on Dean’s Garage.

The long-departed Steve McQueen is still the coolest man on two wheels.

Even thirty years after his death, Steve McQueen remains a cultural icon. His image continues to appear in advertising and pop culture and his fan base spans from car lovers to racing enthusiasts to motorcycle obsessives.  In his movies, McQueen’s character always had an envy-inducing motorcycle or car, but in his personal life, motorcycles were always McQueen’s first true love. McQueen’s Motorcycles focuses on the bikes that the King of Cool raced and collected.

From the first Harley McQueen bought when he was an acting student in New York to the Triumph “desert sleds” and Huskys he desert raced all over California, Mexico, and Nevada, McQueen was never without a stable of two wheelers.   His need for speed propelled him from Hollywood into a number of top off-road motorcycle races, including the Baja 1000, Mint 400, Elsinore Grand Prix, and even as a member of the 1964 ISDT team in Europe. Determined to be ahead of the pack, McQueen maintained his body like it was a machine itself. He trained vigorously, weight lifting, running, and studying martial arts.  Later in his life, as he backed away from Hollywood, his interests turned to antique bikes and he accumulated an extensive collection, including Harley-Davidson, Indian, Triumph, Brough Superior, Cyclone, BSA, and Ace motorcycles.

Today, McQueen still has the Midas touch; anything that was in the man’s possession is a hot commodity. McQueen’s classic motorcycles sell for top dollar at auctions, always at a multiple of what the same bike is worth without the McQueen pedigree. McQueen’s Motorcycles reveals these highly sought-after machines in gorgeous photography and full historical context.

Matt Stone (Glendale, CA), former executive editor of Motor Trend magazine, has been a professional automotive journalist and photographer since 1985. He is the author and photographer of several books, including Motorbooks’ best-selling My First Car (2011), 365 Cars You Must Drive (2006), and McQueen’s Machines (2010). He is the co-author, with Preston Lerner, of Winning: The Racing Life of Paul Newman (2009, 2014) and History’s Greatest Automotive Mysteries, Myths, and Rumors Revealed (Motorbooks, 2013, 2014).