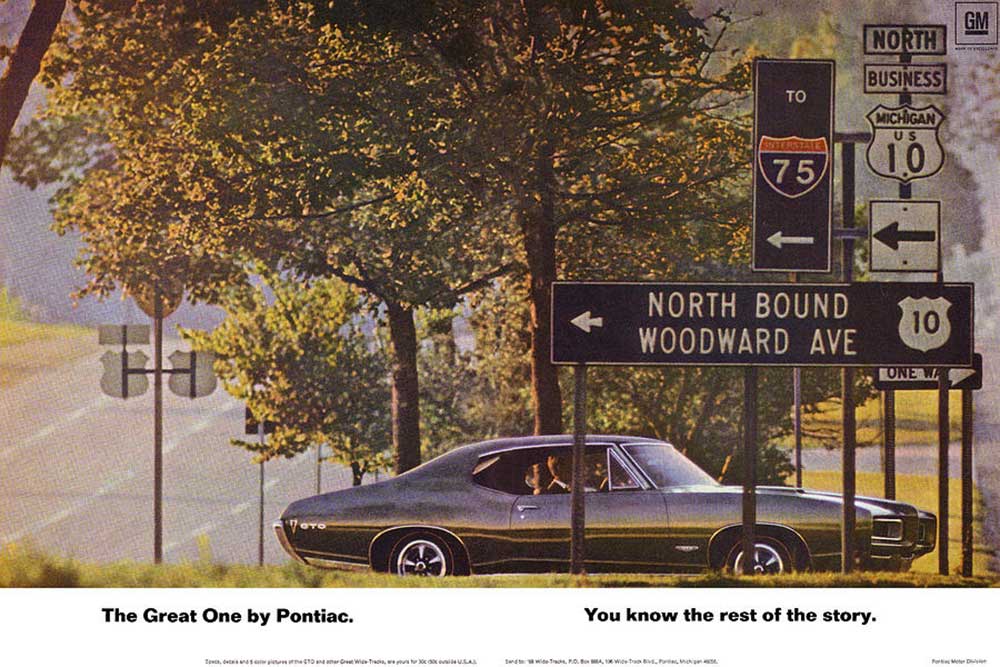 This may be the most memorable muscle car ad of the era.

Diego Rosenberg and Jay Leno at Autobooks in Burbank, CA.

Diego Rosenberg weaves an interesting account of the relationship between the marketing efforts of the car companies, custom builders (like Shelby American), and performance-oriented dealerships. The Big Three plus AMC developed strategies to promote and sell muscle cars in spite of internal corporate resistance, the AMA racing ban, government intervention, and increasing insurance rates.

I was somewhat surprised that many dealers had no idea how to promote and sell performance cars. The car companies developed dealer educational programs designed to equip dealers with the necessary materials and sales training.

I remember Pontiac’s promotion of their OHC six, setting up a short autocross course at the Riverside Plaza, near my home. I think I had to drag my dad along, but I wasn’t going to let that opportunity to drive a new OHC LeMans Sprint pass me by. Pretty cool stuff.

A number of dealerships were with the program without the need for any corporate memos, and produced some of the most outrageous and desirable (read: rare) performance cars of the era. Just because Chevrolet (for example) wouldn’t (or couldn’t) put a 427 in a new Camaro didn’t mean you couldn’t get one. The book mentions dealers such as Royal Pontiac, Yenko Chevrolet, Dana Chevrolet, Nickey Chevrolet, Berger Chevrolet, Dick Harrell Performance Center, Fred Gibb Chevrolet, Baldwin-Motion Chevrolet, Reynolds Buick, Berejik Oldsmobile, Dewer-Griffin Oldsmobile, Chestown Oldsmobile, King Oldsmobile, Century Oldsmobile, Tasca Ford, Kumph Lincoln-Mercury, Grand Spaulding Dodge, Randall Rambler, and many more.

Every chapter starts with a brief history of a brand’s performance car development. The dealerships and racing teams are then discussed, along with advertising strategies. Chapters includes ads from car companies, dealers, and aftermarket suppliers (like Hurst). The car companies supported competition out the back door to generate enthusiasm. They raced on Sunday to sell on Monday. Product development, promotion, advertising, racing, dealer encouragement, and third party suppliers working as it were separately created an homogeneous effort to encourage enthusiasm for their brand and the performance industry as a whole.

A few photos from the book (and other sources)

As the muscle car wars developed in the early 1960s, auto manufacturers scrambled to ﬁnd catchy marketing campaigns to entice the buying public into their dealerships. General Motors, Ford, and Chrysler, with all their divisions, as well as AMC and Studebaker, inevitably sank billions of dollars into one-upmanship in an effort to vie for the consumer’s last dollar.Automotive writer Diego Rosenberg examines the tactics and components used by manufacturers in waging war against one another in the muscle car era. Manufacturers poured millions into racing programs, operating under the principle of “Win on Sunday, Sell on Monday.” Cars were given catchy nicknames, such as The GTO Judge, Plymouth Road Runner, Cobra, and Dodge Super Bee. Entire manufacturer lines were given catchy marketing campaigns, such as Dodge’s Scat Pack, AMC’s Go Package, and Ford’s Total Performance. From racing to TV commercials to print ads, from dealer showrooms to national auto shows, each manufacturer had its own approach in vying for the buyer’s attention, and gimmicks and tactics ranged from comical to dead serious. Selling the American Muscle Car: Marketing Detroit Iron in the ’60s and ’70s takes you back to an era when options were plentiful and performance was cheap. With this book, you will relive or be introduced to some of the cleverest marketing campaigns created during a time when America was changing every day.

Ever since he was a two-year-old kid playing with his dad’s 1967 Cougar, Diego Rosenberg has been a car enthusiast of various marques from around the world. Proximity to Carlisle and race-tracks helped Diego develop a taste for American performance cars of the 1960s, especially when the muscle car hobby was gaining traction in the 1980s. Since then, he’s developed an acumen for the minutiae of post-war American cars and, these days, he’s the voice of the Pure Stock Muscle Car Drag Race in Michigan as well as a veteran of Hot Rod magazine.